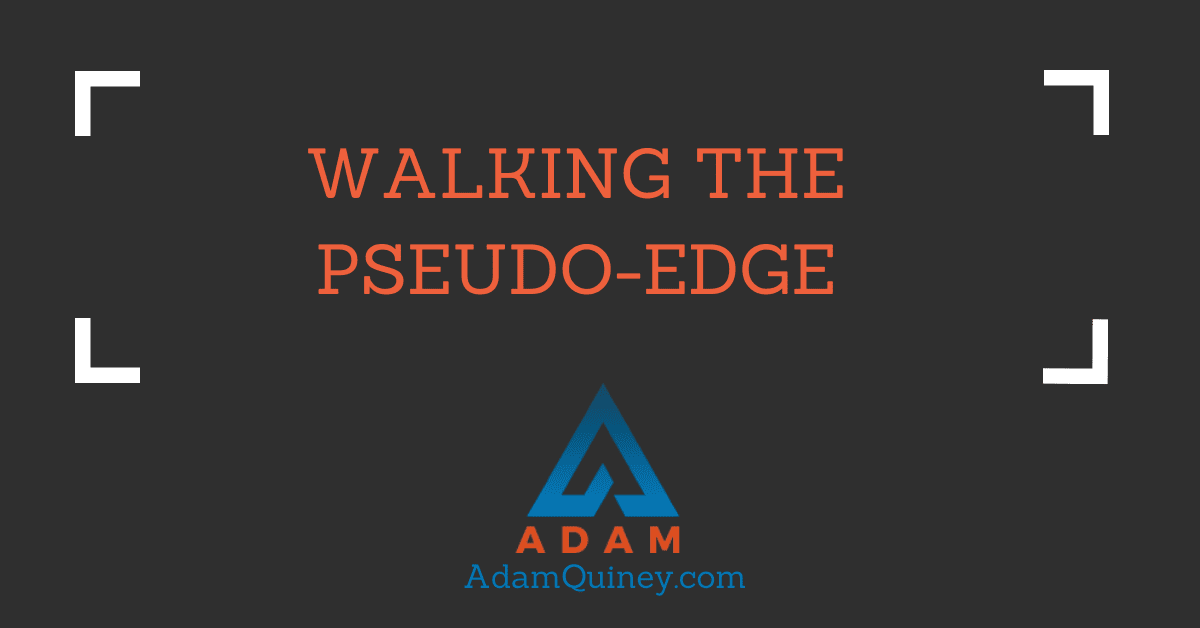 The first truth is fairly self-evident — the wise, wise Internet-o-tron will tell you very quickly that everything you want, and magic, and also unicorns and flying goats are all available outside of your comfort zone. It would be weird to create transformation inside of your comfort zone, because transformation ultimately turns what was previously impossible for you, into possibility. (That’s what differentiates it from mere change, which often just gives you more or a different flavour of what you already know is possible).

Your edge only existing in the moment means that talking about something, by itself, will never be enough to create a transformation. I’m not saying that getting supported in conversation isn’t important (and at times necessary) — I’m saying that you will eventually have to go and do the scary thing, and in the moment you do that thing, it will be edgy for you.

So, anyhow, this isn’t really about those two truths. I just put those there to sound smart (#NailedIt) and set up some scaffolding. What this post is about is the pseudo-edge.

The pseudo-edge isn’t actually a bad thing. It’s just the particular kind of edge that our ego, by itself, will allow us to walk.

Imagine a pie chart, with one quarter of the pie coloured red, and the rest coloured blue.

The part coloured red is the range of your comfort zone — you could also call this your strong suit, or your current range as a person. The red part of the pie is what you already know.

The blue part of your pie is everything else. All of the possibility that exists for you, but that you have not yet stepped into. The blue part of the pie is actually infinite in scope, but I haven’t yet figured out how to get you to draw that, so just trust me on this for now.

When I was a lawyer, the red part of my pie chart included things like: arguing to prove a point, being in conflict with someone, standing confidently in the face of someone’s withering rebuke, and asking people to pay me money after a case had settled.

These things are still in the red part of my pie chart today — they haven’t left, I’ve just expanded my range, so there’s more things in there too.

We are, for the most part, unaware of the blue part of our pie chart. Most of it lies in our blindspot, because we tend to see the world as presented through the lens we look through, which means that we see the world through our existing range.

As a lawyer, I looked at the world, and I tended to see a lot of people to argue with, a lot of places for conflict, and a lot of situations that neatly categorized into right and wrong. In fact, most of my life was a function of doing things right, or doing things wrong and justifying them so that I could get back over to being “right”. I was unable to see the possibility of a given circumstance being entirely outside of right and wrong — that was a new possibility entirely.

The world of right and wrong was entirely inside the red part of my pie chart. I had a lot of mastery in doing the right things, justifying why something was right (or wrong), avoiding doing the wrong things, proving why other people were wrong, explaining how the thing I’d done that was wrong was actually right, etc.

You can probably get that there would always have been new places for me to hone this skill of operating in right and wrong, and even new edges to go and bring this approach to life to. While I was comfortable arguing powerfully about the right and wrong of a given situation in the provincial court of BC, it would have been a new edge for me to go to the Supreme Court of Canada and do the same.

Left to our own devices, trying to create transformation by ourselves, we will almost inevitably take on our pseudo-edge, because that’s the edge we are able to see.

Some people will ask here, “What’s so bad about that? I want to get better at arguing in the Supreme Court and be a better lawyer. That seems like a great edge to pursue!”, and to these people interrupting my soliloquy, I would tend to agree.

There’s nothing wrong with pursuing this pseudo-edge, and in fact, it’s probably an important one to continue progressing down. The point isn’t quite so black and white. It’s not that you should stop pursuing this particular edge, but rather than most of what we say we want in life lies outside of the pseudo-edge. Taking on the pseudo-edge will tend to get you more of the same of what you already have.

So, what do we do about this?

There are two things to do.

The first is that you simply start to get present to this fact. There is almost a surrendering to this truth being put in front of you. At first, we usually want to argue with it. To insist that actually we are able to push into a real edge (that’s not totally a fair term, because even the pseudo-edge is a real edge, but you get my point). And what that arguing does is delay us coming to terms with this immutable fact of transformation. It simply means it takes longer for us to accept the truth, and then begin to do something about it.

Start to notice your pseudo-edge, and notice how most of your attempts to change are actually an attempt to grow inside your existing range.

And second, you leave a comment, so that I can continue to write and we can grow, tackle and transform this together. Where did this land with you? What are you left wondering? Where do you think you might be at your pseudo-edge?