What Happened to the Laughter? 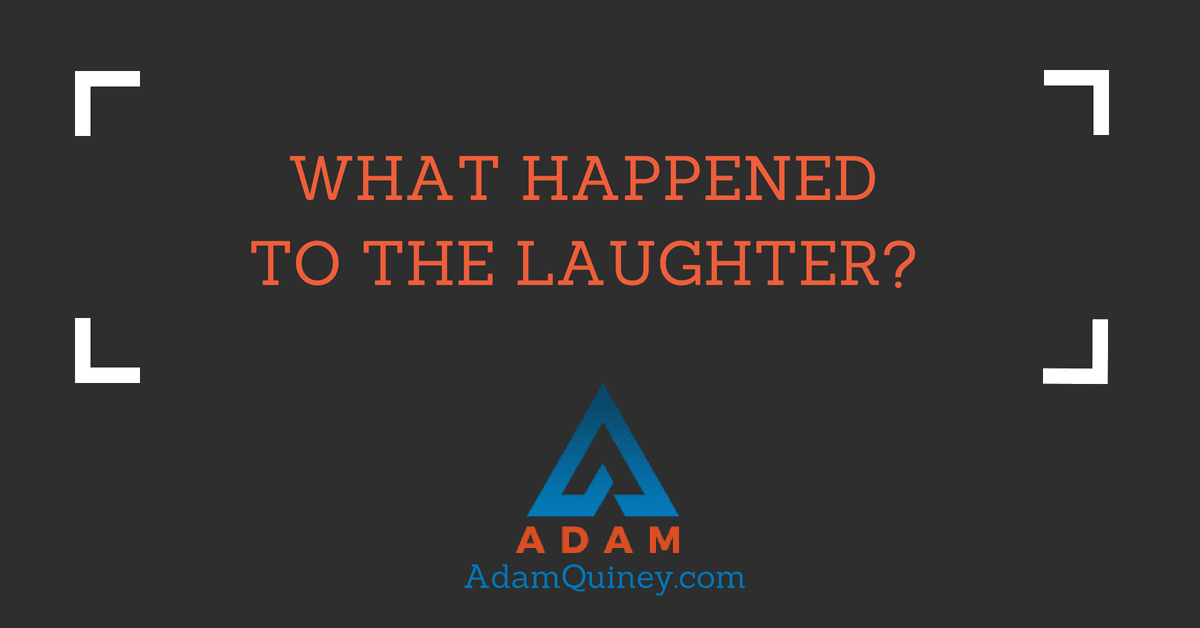 You don’t get it. You love laughing and love making people laugh. But there’s something strange that keeps happening. The laughter seems to get thinner around you. There’s more of it, but it’s richness feels a little anoxic — like it’s missing some essential ingredient.

For all of your life, you’ve known that you were, among other things, “the funny one”. But it feels like this label now defines you, as well as defies you. You feel cravings to make sure people keep laughing. It becomes an “at-all-cost” kind of thing.

You also feel resentful when other people are getting laughs for what you perceive to be weaker attempts at humour. Describing something as “cute” tends to be a dismissive label for you. “Cute” are the kind of jokes that people that aren’t funny make.

The cost of this is that while you’ve never lost your ability to make other people laugh, you’ve lost the ability to do so yourself. While you’ve never been funnier, you feel that life has gotten less so. It feels cynical. Everything feels like a joke, and one that isn’t really that funny.

This person annoys you for a reason that is somewhat unique though. They’re hilarious. You immediately like them because their wit is so quick. They’re keeping everyone around them laughing, and there is a richness to the laughter that they are surrounded with.

You join in, seeking the same feeling everyone else has. The conversation is great, fast-paced, exactly as you like it to be. And this stranger, much to your delight, howls with glee at the things you say as well. He clearly loves your sense of humour, and this matters to you.

This matters a great deal, because at this point, you have labelled him as a person with a good sense of humour. He’s no longer someone below you — you’ve created him as an equal, at least in this respect.

This is not what annoys you about him.

What annoys you is that he’s laughing the same way at the things people are saying that you would label “cute”. He laughs with a richness that you can’t comprehend. He seems so at ease, and his laughter doesn’t feel put on or phony – it simply feels like he genuinely gets caught up in the mirth of the moment.

You’re trying to figure him out. Is he just stupid? But he can’t be, he’s got a great sense of humour, and you know that that requires some kind of intelligence to pull off. Maybe he’s drunk or stoned? You hang on to this one for a while, but notice that he’s just drinking water.

Is he doing it to pity these other people? Maybe he’s just trying to make them feel good about their feeble attempts at humour…

The group disperses, and you spend the rest of the night trying to practice this same thing. You try to really let out some belly laughs at some jokes people tell, but it’s incredibly awkward and disingenuous. People can feel it too. You simply don’t get it.

At the end of the night, you do something really scary and vulnerable: you go over to this stranger, and you ask him about what was going on.

“How could you find those people so funny? You’re hilarious, I just don’t understand it. Do you just have lower standards for humour than me?”

(You’re pretty sure it’s this last one, but the freedom that you experience in this person’s mirth is too compelling to leave it at that).

The stranger smiles and laughs warmly, again, in that obnoxious way he has.

“Well, I’m not really any different than you — you’re every bit as hilarious as I am.” (At this you simultaneously blush a little, resent him for being that arrogant, marvel at his willingness to own this, and delight at the acknowledgment you very much wanted him to pay you).

“The thing is, I’ve just stopped preventing myself from laughing. I’m not constipated like you are.”

When you don’t laugh, he puts back his head and laughs with glee. This guy’s a real dickhead, but you can’t keep yourself from loving him at the same time. You feel polarized.

“Look, the thing is, I don’t have such a vested interest in proving to myself and the rest of the world that I’m funny. And since I’m not competing with other people in this weird zero-sum game, I don’t need to suppress myself the way you do.”

That last comment hits home, and you fall back on your old-standby. A well-timed, clever and witty barb that is designed to put him in his place.

Instead of being hurt by it, this stranger throws his head back and howls. “See, there you go again — you’re hilarious, but those barbs are sharp when you’re confronted.”

“Look, I don’t need you to be any different — but you asked me what was going on with me, and I’m just being honest with you. You need to take a good dump, comedically speaking. You’re absolutely hilarious,” he pauses and looks you in the eyes, giving you time to let that sink in, “Only once you really get that, deep down, can you start to see that everyone is hilarious in their own way, and learn to delight in that.”

“Or you could just keeping eating more cheese and see if that helps with your constipation.” He laughs at his own joke (god, this guy is the worst) and then heads out.

Despite yourself, you allow yourself to laugh as well. Maybe there is something to what this guy is saying…