What Would Shift if We Moved That? 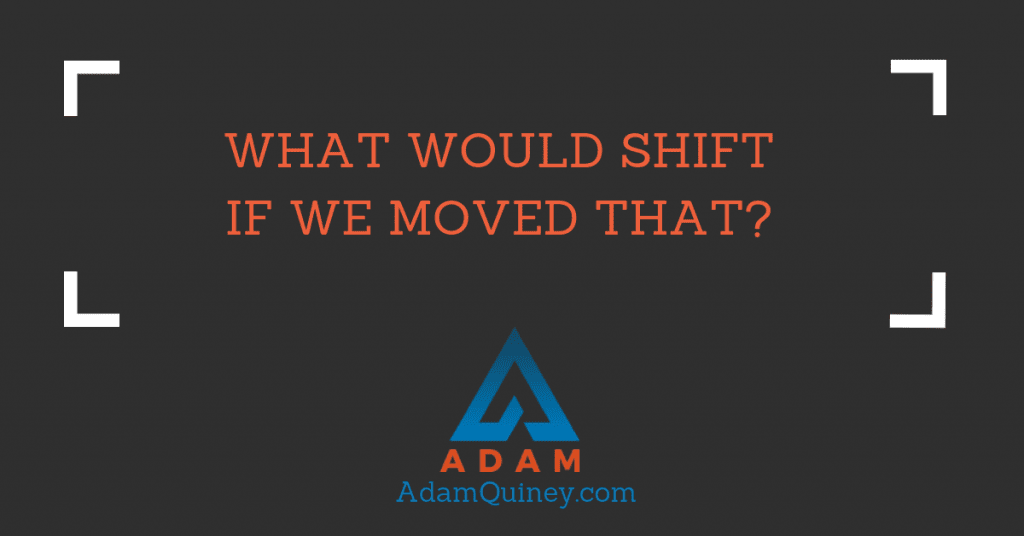 Dennis responded quickly, “Well, sure, but that’s the case for everyone — nobody likes being a disappointment.”

“Riiiight, but let’s not dismiss this so quickly. We can always put this out to everyone. Nobody likes feeling stupid, or bad, or selfish, or sad, or whatever. But this sounds a little more like an allergy to you, than it does a normal thing you ‘just don’t like’. Think of it like a bee-sting. No one likes being stung by a bee, but for some people, their body has an especially potent allergic reaction. For them, it’s not just that they don’t like being stung by a bee — they actually have no capacity to be with that. No pun intended. Make sense?”

Dennis stewed with that idea for a while. “Okay. Yeah, that feels right. Like… as a kid, I remember always hating it when my parents told me I had disappointed them. I heard that a lot. Or I would even just feel their disappointment.”

“Sure! You came by this honestly. Your parents probably trained you in this, the same way their parents did, and so on. They were doing the best they could, with the tools they had. How about in the other direction — what’s it like for you when you are disappointed by someone else?”

Dennis’s response had energy to it, “Oh I hate that! It’s such a crappy feeling. I mean, it’s even easier these days to simply do all the work myself than it is to give it to anyone else, because I’m pretty sure they’re just going to disappoint me.”

Jonathan gave Dennis some silence to hear what he had just said.

“Whoa…” Dennis said, voicing his thoughts. “Well geez, no wonder I’m not delegating. If I always have to avoid disappointment… Hmmm. So, I wonder if one of the solutions here is to hire new people that are amazing and I know won’t disappoint me.”

Jonathan was familiar with this turn in the conversation, “Well, you could try that out. And it would probably work for a while, but what I notice is that strategy is about figuring out better and better ways to avoid disappointment. And as time goes on, your ability to simply be with disappointment — both your own and others — will continue to diminish, like a muscle atrophying from a lack of use. And as that happens, it will take less and less disappointment to trigger your reaction. So eventually, no matter how hard you try, people are going to disappoint you. Do you get that?”

“Mmmmm sort of. Can you say it a little differently?”

“Sure. Here’s a different angle — consider that hiring new/better/whatever people is a strategy to avoid being disappointed (and to avoid disappointing your clients). And then consider that that is the game you’ve been playing all your life — trying to figure out how to get better and better at never having to create and be with disappointment. Your solution isn’t really anything new — it’s the same strategy you’ve always run, but hoping for different results. Can you see that?”

Dennis was thinking hard. His immediate reaction was that he wanted this solution to work — it felt so clear! But what Jonathan was pointing to made sense on a bigger level.

“I think so. I feel kind of like I’m trying to come up with a solution to chop down a tree in front of me, and you’re pointing to the fact that I’m stuck in a forest. I could hire more and better people, but that just keeps disappointment at bay for a little while longer, and because my ability to be with disappointment will keep diminishing, it’s only a matter of time before it shows up and throws me for a loop again. Do I have that right?”

Jonathan cheered, “You have that exactly right. So, rather than solve this, let’s just look at what might shift if we were to address your relationship to disappointment. First, I’m going to assert this isn’t the only place where you’re avoiding being a disappointment, or being with it. where else in your life are you running some version of this?”

Dennis didn’t have to think long. “Well, definitely in my marriage. Claire is amazing, but I’m so afraid of disappointing her, I get all weird when it comes time to give gifts. Christmas and birthdays are a nightmare for me — what if she’s disappointed by the gift I give her? And so then I just default to not giving her gifts, not surprising her, because what if it’s disappointing?”

Dennis thought some more, “Actually, the same thing kind of happens in my social life. Things feel small and kind of stingy on my end. And when my friends disappoint me, like if we make plans and they cancel them, it really fucks me up. I get really angry, and kind of nasty with them.”

“Oh! Actually, another place — this is hilarious — another place would be sports and recreation. I used to play a lot of handball when I was younger, and while I loved the game and was good at it, I found tournaments nerve-wracking. I’d get tremendous anxiety and always choke when it came down to the line. It was miserable. I just hated the idea of disappointing my teammates and the people that came to watch me.”

Dennis was on a roll now, “Geez… It even shows up when I’m giving presentations at work. I check my work so many times, I should be burning holes through the paper it’s written on. It’s not just the vague notion of disappointment anymore — I can’t even let myself make a single mistake.”

Jonathan let Dennis wind down and then asked the next question, “Okay, awesome — so this is not just a ‘I do it maybe sometimes over here’ kind of thing. This is a ‘runs my life’ kind of thing. Fair?” After hearing Dennis’s agreement, Jonathan continued, “Great. So, let’s imagine than you and I eliminate this inability to be with disappointment from your life. I don’t know how, and I’m also not saying that you won’t ever disappoint someone. I’m saying, what if you could simply be with disappointment, without it destroying you and totally shifting your actions. How would your life be different if we created that possibility?”

Dennis took a while to consider that. He thought that they would be figuring out how to hire people better — the conversation they were in was so much bigger than that. As he thought about a life free of avoiding disappointment — simply being with it — the possibilities seemed so vast.

“Holy man. Like, everything would be different. Holidays would be more fun. I wouldn’t have to work so hard because I’d be okay with a little disappointment showing up. Although I might still have to micromanage to make sure customers weren’t disappointed…”

Jonathan broke in, “What if that was okay too? What if instead of making sure your customers were never ever ever disappointed, you changed your relationship to that so that your customers being disappointed was an opportunity to astonish them with your service, and to shore up your processes?”

Dennis laughed, “Well geez Jonathan, then we would be living in a utopia and there would be no more poverty! Seriously, like… it’s hard for me to get my head around all of this. Everything would be different. I would have more time with my wife, and I would have more trust in my life. I would be able to breathe more. I wouldn’t be so hell-bent on avoiding any mistakes, and when I made mistakes, they wouldn’t be so significant.”

Jonathan was inspired by what Dennis was seeing for himself. “What might the impact on your staff be, if their leader started to change the way he was about mistakes — both his own and others?”

“Well, they would probably feel like it was okay to start making mistakes. And, while that would be challenging at first, I think it would also provide way more room to grow. If I’m honest, right now what my people are doing is trying to figure out the way to provide me exactly what I’m asking for so that I don’t get annoyed and redo the work. That doesn’t provide much room for growth or transformation does it?”

Jonathan recognized there was no need for him to answer that question, and stayed silent to give Dennis the space to stay with the possibility he had created.

“Jonathan, if we could create this shift, my life would be radically different. Is this even possible? From over here, it sounds so enormous, and I’m starting to get messed up thinking how to do it. When we got on the phone, I thought you were going to give me some tips about how to hire people better, or how to vet someone in an interview, or how to be more productive — so I could squeeze out another thirty minutes of every day. But this is so much bigger than any of that stuff.”

“Sure it’s possible. That’s the work in front of us, if you’d like to take it on, Dennis. As you’ve noticed, this isn’t about giving you some hacks, or some tips, or productivity boosts. This is about changing the way you show up in your life. And as you’re starting to see, if you shift the way you’re being in your life, the impact is foundational — it changes everything for you.”

Dennis was buzzing. It was hard for him to believe that only an hour ago he had felt tired — he wasn’t sure he’d be able to sleep for the rest of the week, given everything he was present to.

“Jonathan, I really want this. How do we make it happen?

Nothing inspired Jonathan more than someone getting in touch with what was possible for themselves, and wanting to make it happen. Now came the part of the conversation that was always scariest, for everyone involved — the actual commitment…