What you can’t own, owns you 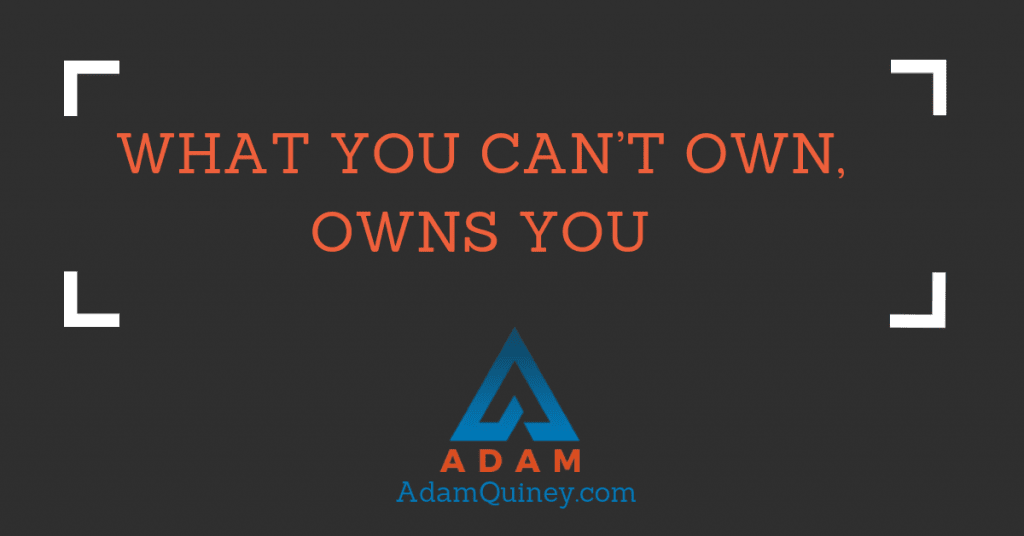 We’ve all got stuff — that’s part of what it means to be a human. By having stuff, I just mean that you’ve got blindspots, areas that you’re unaware of, things you do out of fear, obnoxious patterns, etc. It’s not even that creative or original to have stuff any more. Having a pathology, an addiction, hangups, whatever you want to call it is de rigeur today, and just another part of being a human.

Fingle had stuff, but it hadn’t really been too much of an issue for the first thirty years of his life or so. In fact, for the first thirty years, his stuff had really gotten him somewhere. Accolades from his peers about how hard he worked, promotions at work as a result of his commitment to getting things done, and the ability to see beyond the immediate situation and synthesize the greater trend that was taking shape. From those abilities, Fingle had amassed a pile of promotions, money, a new house, and over the last couple of years, launched a company.

As of late, things hadn’t been going so well. Fingle had had trouble bringing his employees along with him. They seemed to appreciate his brilliance and candour, but he had a hard time getting them on board with what was next and the direction he wanted to take things in.

He struggled with the fact that putting in long hours at work no longer seemed to earn him the results, and really, the life, that he was aiming for. As time had gone on, he noticed that one of the things he’d enjoyed the most — his staff coming and speaking candidly with him about how things were going — had also started to diminish. Instead they would go and speak with his partner, Helen.

It was frustrating for Fingle, and he wasn’t entirely sure what to do about it.

Which was how Fingle had gotten into a conversation with a coach. He’d been skeptical when his roundtable of CEOs had suggested it as a possible approach for him to move past where he was, but one of his fellow roundtable members had been adamant about the benefits they received from their own coach.

Fingle had acquiesced and asked for a referral, which is what led to him picking up his phone and calling Evan at 1:30PM.

Evan answered promptly, and greeted Fingle. As they moved through the pleasantries, Fingle felt his skepticism ease a little. Evan was clearly professional, warm, and genuinely funny. It was also clear that he was very sharp, but didn’t make Fingle feel stupid, or drive up Fingle’s tendency to try to prove his intelligence.

Fingle shared what was going on, how things had worked up to this point, but that he now felt stuck — really stuck.

Evan listened for a while, and asked Fingle some clarifying questions, and then about halfway into the call got a little more directive in his approach.

“Fingle, thanks for sharing everything that you have. I have some thoughts about why you may be stuck, along with some assertions, and I’d like to share them with you, if you’d like to hear them.”

Fingle shared that he would definitely like to hear what Evan thought.

“Okay, great. So, here’s the thing: I can tell you’re brilliant, deeply caring, and committed to something greater than yourself. It’s clear to me, already, that you care deeply about this company and are committed to bringing its vision into the world. That is an admirable thing.”

Fingle noticed how good it felt simply to be seen for this. He took a breath and felt himself physically relax.

“It’s also clear to me that you’re arrogant, prone to perfection and obsession, and pretty rigid — especially around things that really matter to you. And finally, while I notice that you have a huge heart, I’m also present to how protected it is. I keep getting glimpses of you opening up, and then feel you retreat back into your head and the safety of analysis.”

This part, Fingle noticed, did not feel as good. In fact, a couple of things happened as Evan elaborated. First, Fingle noticed that he had an immediate reaction to Evan’s statements. Fingle had reasons for his arrogance and perfectionism, and was waiting his turn to explain why that tendency had come out. Fingle also had more information he wanted to provide, so that Evan go the full picture. Clearly, he’d only told half the story.

Finally, Fingle had the uncomfortable experience of knowing, on some level, that Evan’s assertions were spot-on. At least, in some places. He got ready for his opportunity to explain further while Evan finished up.

“Fingle, I’m imagining that in this moment, you may already have some explanations for me about why I’m seeing those particular parts of you, and you may also have some more information to provide me so that I don’t get a half-drawn picture of you. Basically explaining to me why I’m seeing those things in you, right now. Am I at all right about that?”

Fingle felt caught. Evan was right, but how did he know that? There must be something about the way Fingle was pausing or breathing. He vowed to keep an eye on that as the conversation went further.

“So here’s the deal Fingle. That’s just your stuff. Your perfectionism, maybe even some of your addictive tendencies, your rigidity, your arrogance…” At this last word Evan paused and gave Fingle space to be with the idea of his arrogance being talked about so nonchalantly and openly. “All of those things are just the burdens that come with your gifts. And get this Fingle: there’s not even anything wrong with any of them!”

At this point, Fingle broken into the conversation to protest, only to be stopped quickly by Evan.

“See, look at that! I’m telling you there’s nothing wrong with these traits of yours, and you’re leaping to explain how they’re actually not who you want to be and how committed you are to something different. And I really get that, but what I want you to understand is that there’s nothing inherently wrong with any of this stuff. The real issue is your relationship to these traits. Right now, you have no space for them — no capacity to simply accept the fact that you can tend to lean in these directions.”

Evan was listening with a mixture of glumness and fascination.

“That’s why I knew you were likely already coming up with explanations and justifications for what I am pointing out to you. Because you’ve deemed these traits to be wrong or bad, you naturally try to diminish them in yourself. You don’t have any ability to own your arrogance, for example, so instead you push it down, try to hide and avoid it, and when it shows up, you either apologize profusely for it, or explain and justify its presence.”

Fingle jumped in, “Okay, that actually sounds pretty reasonable. But is that a bad thing? I think it’s good that I explain it and try to avoid being arrogant.”

Fingle could feel Evan’s smile across the phone line.

“No, not a bad thing at all — but it’s an automatic thing. Because you have so much of your ego invested in not showing up in these ways, you have no capacity to own them when you do. No ability to simply accept the fact, in the moment, that you’re being a rigid dickhead.”

Fingle coughed out some of the coffee he’d been drinking. He wasn’t used to being called a rigid dickhead, but there was some truth and humour in that statement.

Evan could hear Fingle clapping with delight across the phone. “See, there’s the beauty of it right there — it’s showing up right now! Now that you’re sort of willing to own that you may have these traits, you’re already moving on to fixing and removing them. Which is really just another way to try and disown these parts of yourself.”

Evan continued, “I know: you’re damned if you do, and dammed if you don’t.” He laughed sympathetically.

“Here’s the thing. What you can’t own about yourself, will end up owning you. If you can’t come to acceptance with the fact that you have the capacity to be arrogant, for example, then you’ll forever have to keep it buried. When that trait rears its head, you’ll feel embarrassed and need to back pedal. You won’t be able to get fully present to your impact, because you’ll be too busy apologizing and explaining and justifying it. These kind of things make it hard for people to come to you for support and really feel all of your humanity — which is part of your job, by the way, as a leader.”

Evan stopped for a moment to allow some space, before going on.

“So for now, I want you to simply notice these tendencies of yours. The first step to owning something is to simply notice that it’s already there. See if you can catch yourself being arrogant, or obsessive, or, dare I say it, a rigid dickhead, and then practice just noticing that as its happening. Don’t even change it. Definitely don’t try to fix it. Just give yourself a knowing smile and continue on, for now.”

Fingle was frustrated. He thought he was going to get a silver bullet or something actionable. Instead, he was just … “noticing” stuff. Still, everything Evan had shared really did resonate.

“Okay, but what do I do once I notice these things?”

Evan responded, “For now, don’t do anything else. Send me an e-mail in a week, and let me know what you’ve seen. We can see if there’s another conversation for us to have from there. And make sure to notice the way your obsession shows up in the way you take on the practice I’ve given you.”

Fingle looked down and noticed the notes he’d already scrawled to himself about picking up a “habit tracker notebook”, creating a new reminder each morning to notice these things, and to spend the evening reviewing his notes.

He sighed, caught once again in the awareness Evan had provided. He scratched over those notes and wrote one sentence before promising Evan he’d get back in touch and ending the call: