When Being Right is What’s Making You Wrong 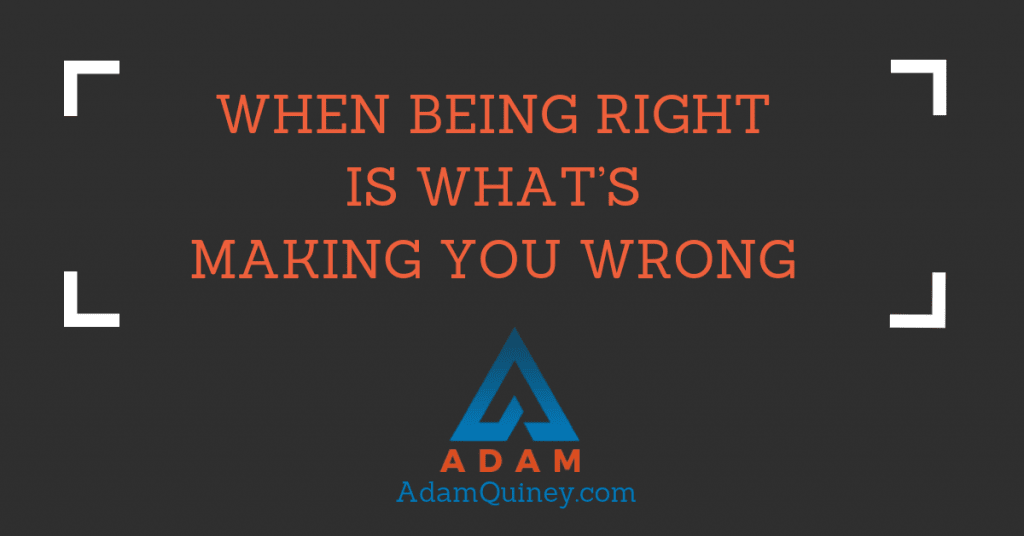 There are a scrillion different beliefs you can carry in your head, and a million that you’re actively operating from at any given time.

We exert a lot of energy trying to prove the beliefs we hold as true, and that the beliefs others hold, in contradiction to our own, are wrong. Somehow, if you can just prove the objective truth and reality of your beliefs, you get to be “right”.

Anytime people are in conflict, it’s often a function of a clash of beliefs. But the same is true for you, internally.

When you’re experiencing conflict, frustration, sadness, “stuckness”, etc. it’s often a function of what you’re currently holding true about the world. I.e., what you believe.

Whatever you believe, you’ll take actions in alignment with that belief, and slowly but surely create a world around you that is a reflection of those actions and beliefs.

If you believe that people are generous and giving, you will act accordingly, and notice the generosity in others. You’ll tend to not spend a lot of time with people that are selfish, and instead, devote more of your time in circles and settings where generosity abounds. If someone challenges your belief, you’ve got a wealth of evidence to prove them wrong. Look at how much generosity is present!

On the other side of things, if you believe people are selfish and opportunistic, you will tend to act accordingly, being suspicious of generosity, always looking to see what the catch is, and rarely being particularly generous yourself (what’s the point unless you’re out to get something). You won’t tend to spend much time around people that are generous, relating to them as idealistic and naive. If someone challenges your belief, you’ve got a wealth of evidence to prove them wrong. Look at how people around you act!

Creating and living from a new belief doesn’t instantly change your experience of life — but it is a choice you get to make.

And if you make that choice, the next step is to acting in alignment with your new belief. Doing sowill naturally create ripples in the world around you — a world, mind you, that conforms to your old belief. At first, this will be messy. You may trigger people (which will trigger you), and you may alienate others. Relationships may change, and you may stop frequenting some gatherings, and instead choosing different ones more aligned with your new belief.

Over time, you’ll notice that not only have your beliefs shifted, but so too has the way you act and show up in the world, and consequently, so has the world you are now surrounded by.

The upshot of this is that asking yourself if you are right about what you believe is a waste of your time and energy.

You are — and you’ve created a world around you that proves that.

Instead, a more powerful question to ask is this: Does my current belief empower me?

If not, maybe it’s time to start creating a new one.