When It’s Time to Commit 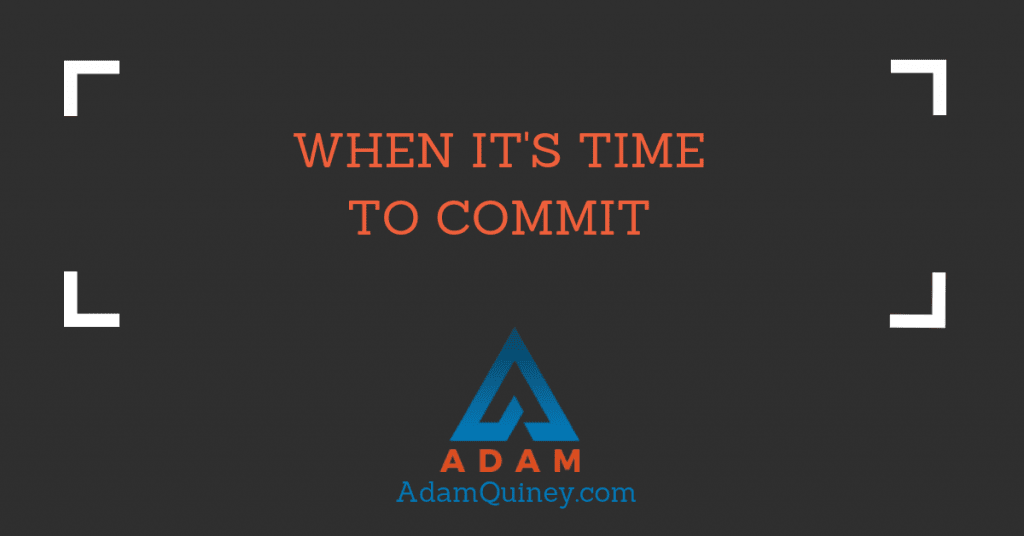 Dennis felt a squirmy sensation in his stomach, but what Jonathan was saying to him did make sense. He shared as much.

Jonathan continued, “Okay, great. So first of all, we’ve gotten clear on a big chunk of the work that is in front of you in your personal life, but haven’t gotten clear on what you might be creating with your executive team at ReggieCorp, if we were to bring our work there as well. Since we’re in a conversation about commitment, I’ll talk about what it would look like to work together on both of those fronts, but with the caveat that we haven’t actually sat down with your team and had this conversation, so we may be getting ahead of ourselves there.”

Dennis agreed with that — it would be good to be clear on the commitment before going further anyhow.

“So first, of all,” Jonathan said, “I’m going to tell you the price, because that’s what we’re usually listening for. Here’s what is going to happen. I’m going to say a number to you, and it’s likely going to take your breath away — your investment here will be more money than you’ve probably ever spent on anything else. Usually people have in their mind a rough idea about the number I’m going to say, and usually it’s far more than that. I’m going to tell you financially what the commitment looks like, and then your head will explode and have all of these thoughts.”

Jonathan paused before continuing, “I don’t want you to pretend like you’re all cool, or that your head doesn’t explode (though it’s fine if it doesn’t) — instead, I want you to share exactly what shows up for you when I tell you what your commitment looks like, because that is every bit as rich for coaching as anything else. Do you get this? We’re going to use the way it goes here as an opportunity to support you and see how things go in life once you find out what it will demand of you. Got all that?”

Dennis responded, “Yup, that makes sense. Though, I’ll say, this build up is creating an incredible amount of suspense. I’m terrified!”

Jonathan laughed, “Fair enough, that’s my bad — I’m not intending to make this scary; my intention is to set us up to have a powerful conversation, rather than a whacky one.”

Jonathan paused. This was usually the scariest moment for both him and the client. He knew that the less he said, the better, but that was challenging because making the kind of proposals he did was scary. Saying those numbers out loud made Jonathan’s knees weak every time. His instinct and ego wanted to keep talking, fill the silence, make the client feel okay, make jokes, or anything else to lighten what was going on for Dennis — but he’d done this enough times that he understood whatever was present for Dennis in this moment was absolute gold.

After sitting quietly for what seemed like four days, he checked in with Dennis.

“What’s going on for you Dennis?”

Dennis sat silently for a while before responding. “Well… you were right. Those are big numbers.”

Dennis sat quietly for a while longer, then began picking up pace, “I mean, okay, those numbers are scary, but I do have that kind of money set aside. But it’s in investments and stuff, so I’m not sure if that could work. And I might have to delay starting with you for a few months until the market really gets itself sorted out. And then with my team at work, well, I’m not sure how I would get them on board, so that’s there. Maybe I just need to think about this for a few months and let it simmer. We’ve been over a lot today, so it might be a good thing for me to let it all sink in.”

Jonathan interrupted Dennis’s flow. “Great! So, a couple of thoughts: first, it’s totally okay to take as much time as you’d like to think about this. You can spend ten years thinking about it if you’d like — no rush, urgency or pressure over here. Before I say anything more, is that totally clear?”

“Great. Second, if you’re up for it, before we jump to ending the call and having your head chew on this, would you be alright if we spent a little bit of time checking in with what’s actually going on, so we can use this as an opportunity to see how things predictably go for you?”

Dennis responded slowly and deliberately — his head was running with this now, “Yes. Sure. I’m not entirely clear on what that looks like but I’m down for it.”

“Okay, awesome. Third, I want to be really clear that my intention here is only to support you. Not to convince you of anything, not to get you to a yes, not to get you into a commitment with me. If what is best going to support you is for you to get into a coaching relationship with someone else at a lower rate, than I want you to know that is okay, and I can support you with that — I know some amazing coaches and I’m happy to make some referrals for you. But, before we go there, I think we can really do some good work here just taking a look at what is showing up for you in the face of the proposal we’ve put on the table. Sound good?”

Dennis liked that, in spite of thinking that Jonathan was the weirdest businessman he’d ever worked with. Referring him to someone at a lower rate? What kind of madness was this?

“Okay, yeah. That sounds great — thank you. I think you’re a little loopy for that offer, but I appreciate it.”

Jonathan laughed, “Yah, I can get that. I used to hold it the same way. But over here, I’m pretty clear that supporting you throughout this process, rather than once you’ve given me money, is going to be way more rewarding for both of us.”