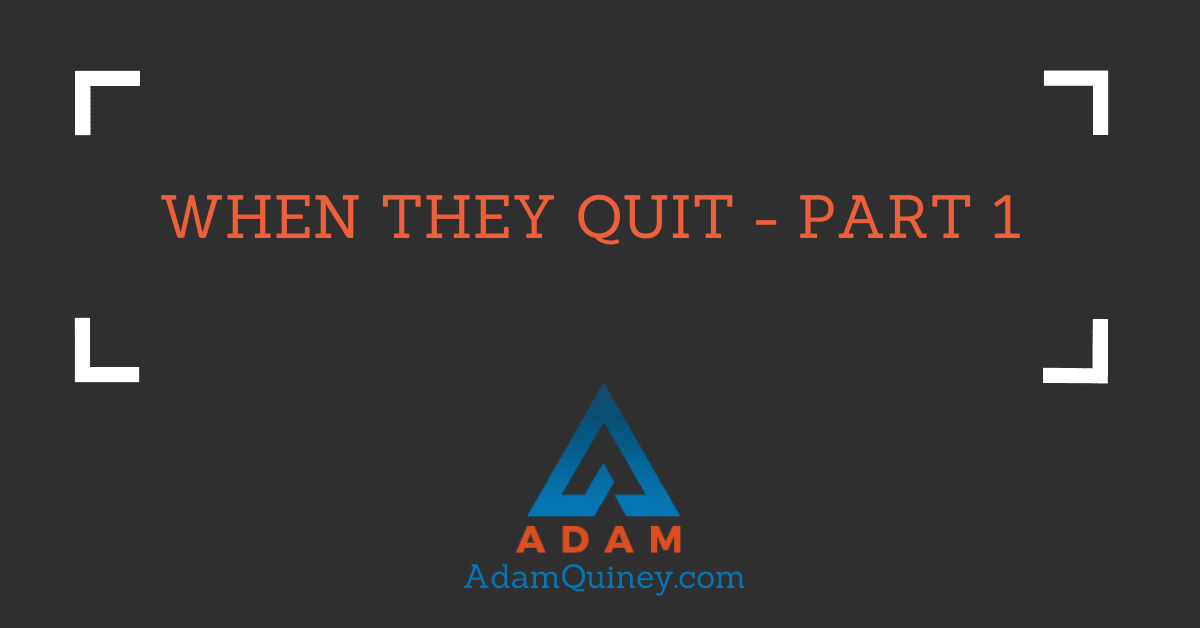 Jonathan and Regis had been working together for just shy of six months now.

Jonathan had noticed that Regis was showing up less and less to their calls. He was making them on time, and physically present. But his check-in forms were becoming more and more sparse, and last-minute, and the things they talked about Regis taking on simply weren’t getting done.

Regis’s latest check-in form had the words Jonathan had grown to expect once they reached this point in a coaching relationship: “I’d like to talk about our coaching”.

Regis called in, and Jonathan greeted him. They exchanged pleasantries and got connected, and then Jonathan asked Regis, “So, I got your pre-coaching form — what would you like to talk about?”

Regis nodded and then began speaking.

“Well, I’ve been looking at how things are going. And I’ve noticed that I’m not taking on any of the things that I said I was going to be taking on. Like, we have these conversations, and we create some good awareness, but then I go away and I just don’t do anything. And I want to be clear Jonathan that this isn’t me blaming you for this — like, you’re doing great, it’s just I notice I’m not showing up to the coaching the way I thought I would, and so I’ve been taking a look at that.”

Jonathan had been in this conversation many, many times before. He knew that what there was to do right now was stay open, love Regis, and really get how things were occurring for him.

“I find that I just don’t have the time to take these things on. And I also notice that I just don’t seem to be that motivated. You know? Like, if I really wanted the stuff we’re talking about, I’d be taking it on. So, I’ve really been taking a look over the last couple of days. Asking myself ‘Hey, how come you’re not doing this?’. And when I started out working with you, I really wanted to make the most out of this, and I notice I’m not.”

Jonathan nodded and did his best to really get Regis. It wasn’t easy. Jonathan could see, with a lot of altitude, that where Regis found himself made a great deal of sense. Of course he had to arrive at this point — this is the way it kept going in Regis’s life when he wanted things to be different. But for now, Regis wouldn’t be able to see that, and Jonathan pointing to it would only drive up his resistance. Instead, Jonathan put his attention back on seeing how much sense Regis’s current thought-pattern made, down on the ground of his own experience.

“So, since that’s where I’m at, I think what we need to do is take a break. I know you and I talked about quitting at the start of all of this, and I want to be really clear that that’s not what I’m doing. I just want to take a break from this, so that I can get re-motivated. If anything else, I’m doubling down on my commitment.”

Regis eventually drew down to silence.

Jonathan sat for a while waiting to see if there was anything more Regis would say. This was always an edgy conversation, for both people, and so Jonathan wanted to go slowly and provide as much space as he could. When Regis didn’t speak, Jonathan took a breath and shared.

“Okay. Thanks for sharing all of that Regis. That makes sense. Is there anything else?”

Regis sat for a while, and then responded.

“Hmmmm. Well, I want to be clear that this isn’t a criticism of you, and I’m not quitting. I’m very much committed to what we’ve talked about. I think maybe now just isn’t the time. And also, I noticed I felt a huge relief when I thought about taking a bit of a break, and I think that’s really important. That tells me a lot, you know?”

“Okay! That all makes sense Regis. Let me make sure I’ve got everything you shared, so that I’m not stepping over it.”

“So first, you’ve noticed you’re not really showing up the way you want to in our coaching. You’ve been taking a look at how things are going, but also noticing that you aren’t taking on the practices we’re creating, and even though you didn’t say this, it sounds like you’re kind of noticing the projects you said you wanted to create aren’t getting done either. Do I have all that right?”

“Good. And then it sounds like, from looking at that, you’ve concluded it means you’re not motivated and just don’t have the time to do these things. And if you really did want this stuff, you’d be more motivated. Like,” Jonathan laughed a little as he was speaking, “Like if you wanted a bowl of ice cream while you’re watching TV, you get up and get a bowl of ice cream. You don’t have to do too much to make it happen. It’s not like you sit there thinking ‘I REALLY WISH I WOULD GET A BOWL OF ICE CREAM’ but then don’t. Something like that?”

“Okay, perfect. And, then from all of this, it sounds like the solution you’ve come to is to take a break. If the problem is a lack of motivation and just not having enough time, then maybe we need to take a break until you have enough time and motivation. Something like that?”

“Okay, got it. Is there anything I’ve missed, before I go any further?”

“No, that pretty much covers it.”

“Okay, good. So, that all makes so much sense! I can really get where you’re at, what you’re experiencing, and the conclusion or solution you’ve reached makes a lot of sense to me as well. Given everything you’ve just shared, of course the solution is to take a break. Then you can come back, fresh up with motivation and do the stuff that you’re here to do. I really get it.”

“Now, I don’t want to take anything away from you. Even though you and I have an agreement that you go all the way through our time together, and even though we’ve set up other agreements around all this stuff, none of that is to force you into something. I’m not going to take out a lawsuit against you if you change the nature of what we’ve agreed to. Our agreements are solely in service of your breakthroughs — not in service of forcing you to do anything. The most important thing I want you to get in what I’m sharing is that, at the end of the day, whatever you choose is okay. Is that clear?”

Regis nodded. “Yes, thank you for saying that”.

“Okay, good. Now, having said all of that, I’d love to have a conversation about this with you — my hunch is that there’s some altitude we can create together, that may support you in seeing things in a slightly different light. Again, I want to be clear that this isn’t to force your hand, or trick you into something. You may well make a different choice once you have more altitude, but that’s secondary to us having the conversation. My commitment is always to put you back at choice in your life, and the best way we can do that is having you see with the clearest of eyes. Are you up for a conversation around this?”

Regis felt more relaxed. Coming into this conversation, he was worried that Jonathan was going to hammer him, or tell him he was wrong, or try to convince him otherwise. “Yes, I totally am. Jonathan thank you for just letting me … like, have this. I felt like I was going to need to defend myself, but I don’t feel that way anymore. I feel more relaxed about this.”

Jonathan smiled warmly. “Absolutely Regis. From my vantage point, you’re exactly where you need to be. The thing that’s in the way /is/ the way. We can’t move past this place you find yourself getting stuck until we’ve had this conversation, so you’re actually doing your work here. So, let’s take a look at this and see if there’s anything else at play beyond what you’ve already shared.”