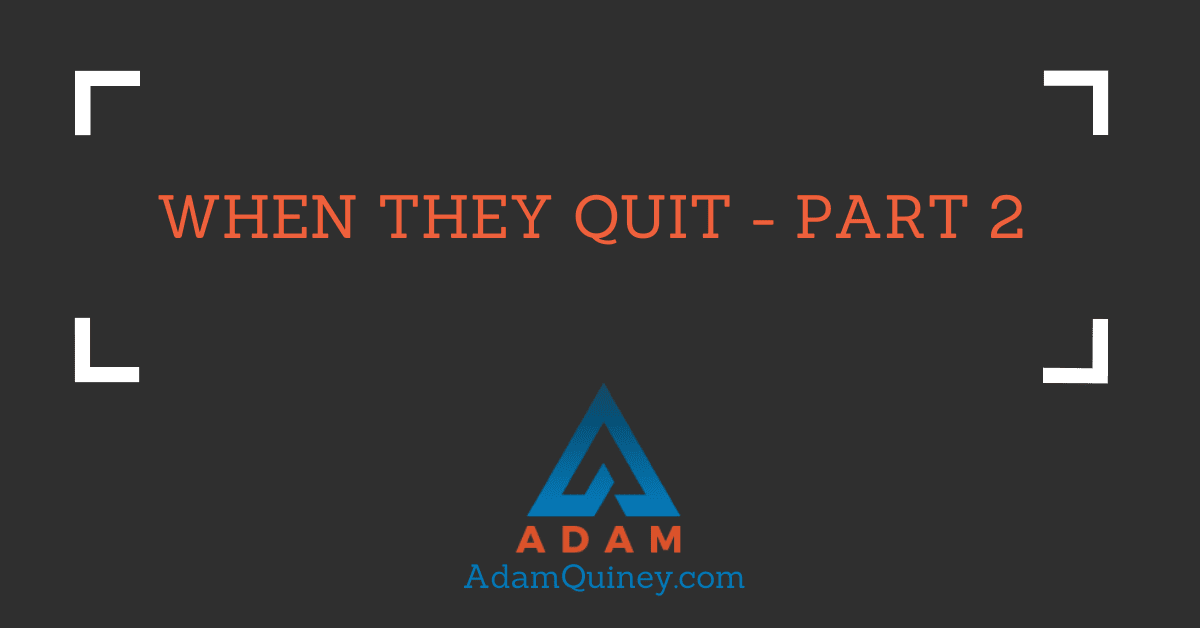 Jonathan had just finished re-iterating what Regis had shared, as far as how things had been going in the coaching, what he noticed wasn’t working, and why he felt it was time to take a break.

“Okay Regis, so I think I’m clear on your experience with coaching. Basically, it’s like, you thought you were going to start working with me, and you’d be taking on this awesome stuff and your life would change, and instead, it sounds like it’s kind of going the way it usually does.”

Regis interrupted. “What do you mean, the way it usually does?”

“Oh thanks for saying that Regis, I have a hunch that I’m not labelling as such. My hunch is that this isn’t the only place in your life where you’ve committed to something, and then found that things get in the way. I’m guessing that this isn’t the only time you’ve made a commitment, been earnest about keeping it, and then found that, as time went on, you took less and less steps toward doing so. Is my hunch correct?”

“Yes, okay, I can see what you’re saying. I can think of a few places. Like, definitely with weight loss or going to the gym and things like that.”

“Great, where else? Let’s look at the projects we’re working on — we started working together because you wanted to build this business you’ve been talking about for years. Have you ever taken a swing at that before, and if so, how has it gone?”

It didn’t take Regis long to respond this time. “Actually, yes. Okay, sure — I’ve tried to build this business a few times. And pretty typically, I start taking steps, and then I kind of get distracted or lose interest, and then stop acting toward it.”

Jonathan nodded. “That makes sense. And if my memory serves correctly, you even mentioned this when we first started working together, sharing that that was how it had gone in the past. Does that sound right?”

A grin broke out on Regis’s face. “Ha, yes, actually. We did talk about this.”

“Good — that’s what I thought. So look, it would make sense that it’s showing up again. Regis, most people believe they’re going to hire a coach, and then their work will be done. Like they’ll start working with me, and they’ll double-down and all of the resistance they used to have will be gone, because I’ll hit them in the back of the head with a stick if they don’t do what they say they’re going to do. Does that sound at all accurate?”

Regis laughed. “Yes, totally. But you aren’t hitting me with a stick, and I haven’t been doing what I said I wanted to do.”

“Exactly! I haven’t been hitting you in the head. We could do that, if you thought it would really make a difference, but I notice you’ve been doing more than enough of hitting yourself with a stick for the both of us. And, that hope — the hope that we’ll suddenly stop being resistant to taking on what we want to do — that’s kind of fantasy.”

Jonathan paused and drank some water.

“Coaching doesn’t happen outside of your life, after you’ve gotten it all sorted out. It happens inside your life, as you’re living your life, the way you’ve always lived your life. The only difference is that here, because you’ve committed to being in this conversation, we can’t run away from it. You’ve agreed to take away the safety exits that would normally let you escape and keep the same pattern going. Does this make sense so far Regis?”

“Great. So, as a result, the difference coaching can make isn’t that you stop being the way you’ve always been. The difference it can make is that you show up the way you always do, and then we can have a conversation about it, so you can distinguish what’s going on, and choose something different.”