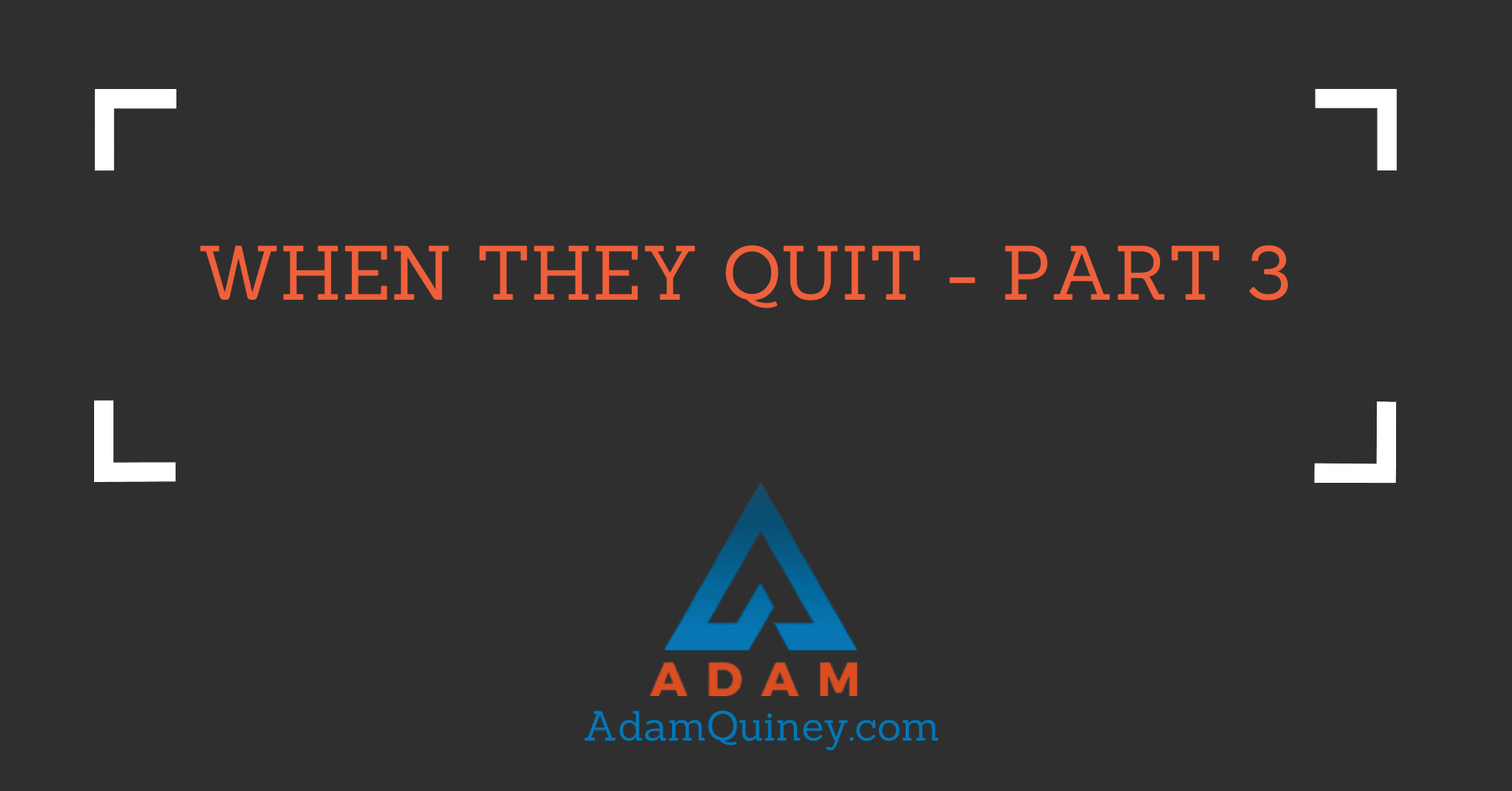 Jonathan was working with Regis, slowly, around the quitting conversation he’d brought forth. Jonathan wanted to make sure that Regis wasn’t given anything to fight against, because then Regis would be in a battle with Jonathan, rather than against himself and his patterns. Rather than keep this hidden, Jonathan just put it on the table.

“So Regis, I want to make sure I keep my hand visible to you this whole time. I’m not trying to trick or fool you at any point. I’m here to support you, and so I want to make sure I’m not giving you anything to fight against. Coaching should never be about the coach trying to convince the client — it’s about supporting you to overcome whatever it is that is currently stopping you. Clear?”

Regis nodded. “Yup, perfectly clear. I’ll let you know if I think you’re trying to convince me of something.”

“Great. So, we’ve gotten clear that there’s a way it goes for you. You say you’re committed, start taking some actions, it works for a while, and then slowly, but surely, you find yourself not doing what you said you were going to do. You’ve shared that there are places where you’ve seen this same pattern show up before. Like losing weight, going to the gym, and how you try to build your business. So let’s just look at the cycle that tends to play out. What happens there?”

Regis sat and thought to himself quietly before speaking.

“Okay, well, at first, I slowly start to do less and less. I’m not really showing up, but I kind of half-heartedly put effort and energy into it. Then, when that isn’t working, I berate myself for what I’m not doing. I get annoyed and kind of judgey about the fact that I’m not doing what I say I’ll do. And then over time, I just avoid it altogether.”

“Well, usually I just give up at that point. I’m like ‘Fuck it, why bother?’…” Regis trailed off.

Jonathan waited and gave Regis the space to process whatever was going on for him.

“Huh. So this is the same thing here.”

Jonathan nodded, not from knowing that was the truth, but simply to affirm he was tracking with Regis.

“Right, that makes sense Regis. Tell me, what would happen next in this pattern?”

“Sure, we’ve got that. But then what? Like, if we keep drawing this out, I’m guessing this isn’t the first time you’ve tried to lose weight, or start a business, or whatever?”

“Hmmmm. Well, I guess what would happen next is that I would just say ‘Fuck it’, walk away from this, and then leave it for a while.”

“Okay, well… Hmm. Next I think I would distract myself for a while, and probably feel really good because I’m not beating myself up about what I’m not doing.”

“Well that makes sense. So you kind of give yourself a reprieve from the self-loathing for a while?”

Jonathan noticed the weather outside had taken a turn for the worse, and lit a candle to provide a bit of warmth in his office while they continued to talk.

“Does the lack of self-loathing last or does something else happen next?”

“Well, it lasts for a while. So I kind of drop the gym, or the business I’m trying to create, or whatever it is, and I hang out in the relief of that for a while. But then over time, I start to hate on myself for not doing what I’m here to do. Like, it’s great for a while, a few months or whatever, but then I start to feel purposeless, or resentful of the people that are creating the business I want to create, or frustrated with myself for not really taking on my health.”

Regis mulled over that.

“Okay, so, what happens once we’re there Regis? Are things any different?”

“No, not so much. Well, I mean, I’ll take on whatever there is for me to take on next. I’ll start going back to the gym, I’ll start eating properly again, I’ll pick up my next business idea, and then I’ll be motivated again.”

“Okay, so, Regis, over here it kind of sounds like this keeps you hovering in the middle. Like, at least half of the time in this cycle, you ARE going to the gym, or working on your business ideas, or whatever, but it’s a bit like driving a car where you keep alternately hitting the brakes and the gas. It sounds like it’s hard to really build up momentum. Is that your experience?”

Regis answered quickly this time. “It totally is. Like, I alternate between periods of motivation and lethargy, but I never really seem to breakthrough whatever would have things really go differently.”

Jonathan sat in silence as he considered what Regis had shared. This made sense — it was actually quite relatable. Jonathan imagined being in this same pattern himself and how that would feel.

“You know Regis, it also dawns on me that part of this pattern means that you generally hang out in a lot of self-loathing, with brief periods of relief. Like, that seems to be a bit of the underlying experience throughout this. Would you say that’s true for you?”

Jonathan laughed along with Regis.

“Okay, so it seems like we’re in the same pattern here as happens everywhere else. Which would make sense, because part of what this structure, of coaching, is intended to do, is get you to make commitments in your life, and then take action towards them. And it sounds like we’re now in the ‘Not doing what you say you’re committed to and hating yourself for it’. That sound right?”

Jonathan nodded as well. “Okay, great. So, I think there’s a choice in front of you: you can take the usual path in the pattern, which would be to alleviate the self-loathing by dropping the commitment and walking away for a period of time, and then coming back to this. Or, alternatively, we can break up the pattern and create something different here. Is that how it looks to you?”

“Yes, and Jonathan, I do want to break this up. Especially now that I can see it so clearly.”

“Great! So, what do you think there might be to do, from here, to have things go differently?”

—–
This post is part of an ongoing series about supporting someone once they’re in a quitting conversation.