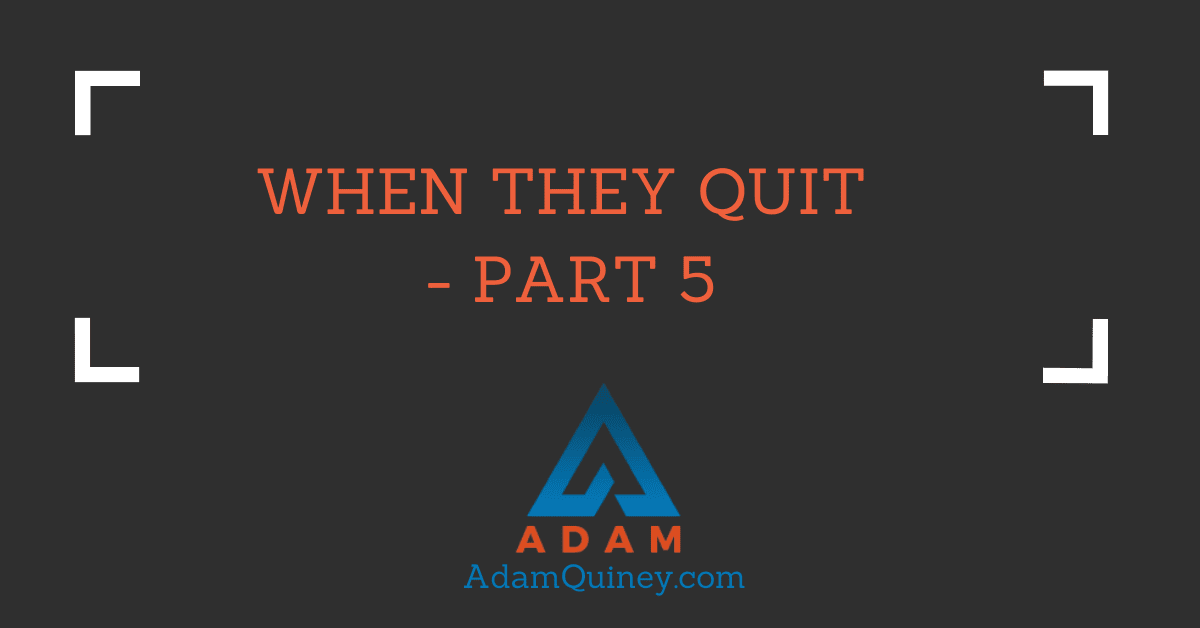 Regis was nervous, and Jonathan was too. They were in the final steps of Regis getting himself back to a YES. Jonathan was listening to some jazz music while he sat in the tension with Regis, holding the space for him to see his pattern as it unfolded.

“So, we’ve gotten clear that taking a break from coaching is actually more of the same pattern as before. It’s basically taking the mirror away from yourself, and then at least you don’t have to see the whole pattern and the way things are going so starkly. Am I on the same page with you?”

“Okay, great. So, we can move to what is next, but I want to check in with you first and see if there’s still a conversation for us to have about quitting coaching. If so, then we probably need to stay there. Otherwise, we can leave the mirror in place, so to speak, and shift our conversation to take a look at how we create the results you want. So, which is it?”

“Well, first of all, I don’t know how we got here — like, I’m not so sure I could retrace my steps — but I feel really clear that quitting coaching would make me feel a whole lot better but isn’t actually going to create any different kind of result. It’ll just let me keep running the same pattern, which includes a period of feeling relief. So, I’m in. Let’s take that off the table, and look at how to move past what seems to not be working.”

Jonathan nodded. “Great, Regis! That’s really courageous. I want you to know that I really get taking a break, or quitting, or whatever, would feel very relieving. I applaud you for choosing to stay with your feet to the fire. So, let’s shift to the good stuff: you generating the results you want. It sounds like you’ve been declaring a bunch of things you’ll take on, and you haven’t been doing so. Is that right?”

“Yes, exactly. I have all the intentions to do so on Wednesday after we talk and then before I know it, it’s Tuesday and I’m filling out my form for our coaching and I see I just failed.”

“Okay. Well that makes sense. We’re trying to create a result outside of what you’re already reliable to do. This is something that wouldn’t just happen automatically, right? If it would, just by your desire to have a new kind of result, then you’d already have created it by now, yes?”

Jonathan noticed the conversation about quitting had created some tension in his shoulders (as it often did). Knowing he would be no good to his client, breathless and tense, Jonathan stretched and took a deep breath before continuing.

“Okay, so would you be alright if we simply labelled the fact that this stuff isn’t happening as your resistance?”

“Well, I don’t feel like I’m actively resisting it though? Like, I just don’t even think about it.”

Jonathan nodded. “Yes, I get that. It isn’t really an active resistance. It’s more of a passive one. So, in order to overcome your passive, kind of automatic, resistance, we’re going to need to create some active structures. Something to have things go differently for you. What would you say is getting in the way of you taking on these actions?”

Regis thought. “Well, I think ultimately I’m scared of failure, and then because of that, I’m also scared of looking dumb.”

Jonathan jumped in. “That’s great Regis, and I can totally relate to those fears, but I want us to be a little less… sophisticated about this. Like, without making it mean anything, without looking for a deeper truth, what would you say is getting in the way? Like, the simplest answer — how isn’t this happening?”

Regis felt a little silly, but responded all the same. “Ummm, well, I guess I’m just forgetting about it. Like I said, I just look up and suddenly it’s Tuesday.”

“Okay, so it sounds like it’s just not top of mind for you, and then, as a result, it just doesn’t get done. Is that right?”

“Yes, exactly. I’m not trying to not do it. I just don’t think of it, and then it conveniently doesn’t get done.”

Jonathan smiled. This was his own personal favourite way of not doing things as well.

“Okay, so, what kind of structure do we need to put in place to keep this top of mind for you Regis?”

“Hmmm, well, I suppose I could set an alarm on my phone to go off?”

“Okay, great. And I know for myself, once something is in my calendar, I’m much more reliable to do it. Would that support you?”

Regis nodded his head. “Yes, absolutely. Actually, one of the things I’ve noticed is that I don’t schedule time for our practices. Like, I schedule everything else in my life, but then I seem to have this belief that I’ll just magically take on the hard stuff you and I talk about me doing, without needing to put it in my calendar. I’ll do that too.”

“Great. Would it serve you to do it right now, since we’re already talking about it?”

“Yes, actually, thanks.” Regis loaded up his calendar and began scheduling while Jonathan went and refilled his water.

“Okay, I’m all set. I’ve set aside three hours this coming week to work on my practices.”

“Okay, awesome work Regis,” Jonathan said, “and now one last place for us to look — knowing you as you do, what do you imagine will happen when you get that alarm on your phone, or see that calendar appointment pop up? Like, how will you sabotage this?”

Regis scrunched up his forehead and sat in silence for a while.

“I think what will happen is that I’ll just schedule over top of my appointment. Like, I’ll decide something is more urgent and do that instead.”

“Okay, perfect, good distinguishing. So we’re actually anticipating here that you’re going to have the stuff you’re labelling as important — your practices — get derailed by stuff you relate to as urgent. And that makes sense, because it’s also the thing you’ve been saying is keeping you from having the quality time you want with your wife. So we’ve got a really great thing to practice with. What will you do when it comes time, and you have something urgent show up? What will support you to stay on course this week?”

“Well, I think the best thing might be to remind myself of the importance of all of this. Why I’m taking it on, and also a reminder of the consequences if I don’t. Like, this isn’t going to change if I’m not willing to focus on what is most important, and let the urgent sit for a while. I think it might also help to ask my assistant to remind me at the start of my time that I should be focusing on this, and let her know what I’m trying to take on here.”

“And, actually,” Regis added, “I think I could also ask him not to bring me anything new during these appointments. He might even have some ideas for how he could support me with this!”

“Great work Regis!” Jonathan said. “Does that feel like we’ve got some structure in place to support you with how this goes this week?”

Regis nodded, but added a concern. “I’m worried that this won’t be enough. Like, that I’ll take these things on, and I’ll /still/ find a way to avoid doing them.”

Jonathan smiled compassionately. “I can empathize with that worry. That’s okay too. We’re not trying to perfect things here. We’re working with what is showing up, moment by moment. That’s why this works Regis. We notice the roadblocks that we come up against, then do the work to move them out of the way. That’s the reason I celebrated you when you first showed up to the call today saying you wanted to quit. That’s an important roadblock for us to support you moving beyond. Quitting is one of the first and most effective ways for us to keep ourselves from getting what we want. You’re doing really great work Regis.”

Regis felt reassured and shared this with Jonathan, adding, “You have the weirdest job, Jonathan. Like, you put a whole ton of time and effort in ahead of time, for no money, to support someone, and then you’re telling me that part of your job is to get me to the point that I want to quit, and then not make me wrong for it. You must be a masochist.”

Jonathan laughed. “Well, it’s scary, and I get taken out by it from time to time, but that’s the nature of supporting other humans, and myself, to thrive. For me, the quitting conversation is one of the most sacred conversations. It’s the one where I set my own ego aside and simply be with you in your process. I think we’ve hit an important milestone, together, today, and I am going to celebrate it tonight. I hope you will too — you’re being so inspiring in our work.”

Jonathan wound down with some acknowledgment of Regis, and ended the call. He stretched out, got up, put the kettle on to make some more tea, and then sat down and checked his e-mail.

The e-mail right at the top was from another client of Jonathan’s, about six months into their time together. The subject line read “Can we talk about our coaching?”

Jonathan felt the familiar sinking of his stomach, took a deep breath, and reassured himself. “It’s okay. This is the game you signed up for. She’s right where she needs to be.”

As Jonathan waited for the response, he took a breath and reminded himself why he was doing this.

And then he was off to the next conversation…

This post is the conclusion of an ongoing series about supporting your clients when they’re in a quitting conversation.