Why do most people never manage to change their life? 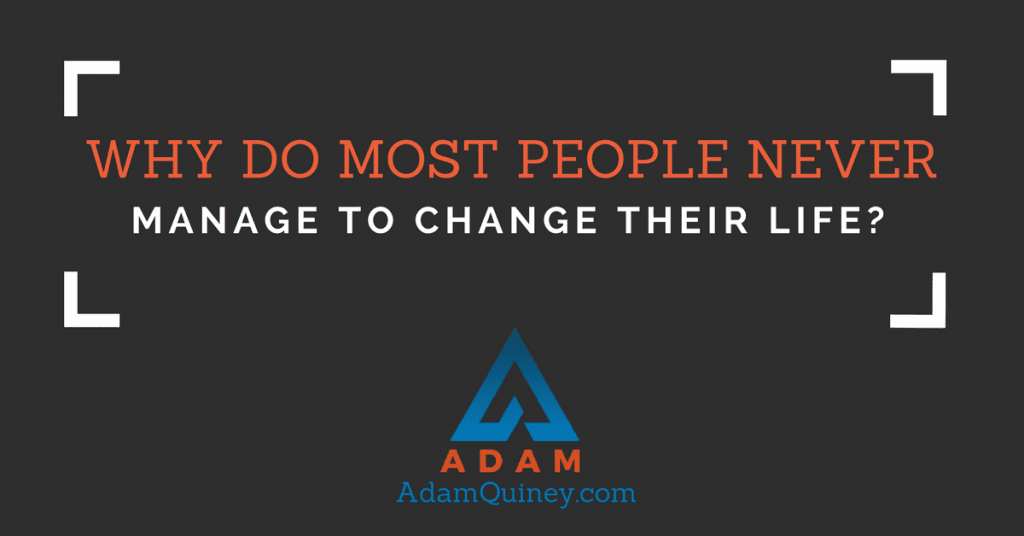 Today, a cross-post from a question I was asked to answer on Quora. Enjoy.

Many of the answers already provided give a sense of some of of the things that are getting in the way of people changing themselves on the surface level.

The trouble with trying to affect change at the surface level is that it is addressing the symptom of the problem, rather than the root of the problem.

It’s like trying to put a band-aid on a knife wound. It might look like it’s staunching the flow of blood and things are working out, but the punctured vital organs underneath are the real problem. No amount of bandages are going to solve the problem until the internal bleeding is addressed.

For every solution provided to this problem, there are people with that particular attribute that have failed to changed their lives.

Let’s use an example:

Suppose we have someone who has grown up very poor. Every day during their childhood, they were told not to ask about money, and taught to be concerned about it.

Every day they came home, there was no guarantee where the next meal was going to come from. Their parents didn’t talk much about money, but the general attitude was “Don’t think too much about money, because if you look there, you’ll see just how bad things are. Better to keep your head down, work hard, and hope that our next paycheque will come through”.

This child grows up with a conviction about two things:

1. There isn’t going to be enough money; and

2. In order to address that problem, they are going to make sure that they make a lot of money.

Now fast-forward in that person’s life. They’ve created a very successful career in finance as an accountant. They’ve learned how to manage money very meticulously. There level of detail has given them many gifts — they know exactly where to put money so as to earn the highest amount of interest, and they’re always moving their investments around. When the stock market crashes, they don’t get too impacted by it, because they knew to diversify their portfolio. They always seem to be one step ahead of the curve.

Has this person successfully changed their life?

On the surface, they sure have! They’ve risen out of poverty. They have large amounts of investments that bring in more and more income each month. They don’t ever have to worry about money!

Except that’s all they do. They’re constantly concerned about the next turn in the market. Every waking hour is consumed with how they can ensure that they keep the wealth they’ve amassed and how to amass even more. There’s never enough money.

They’re making enough money that they could hire a maid, hire someone to cook their meals, give them some time to relax and enjoy the life they’ve created, but they don’t, because they never know when it’s going to hit. They never know when things are going to change — so they keep saving. Keep trying to make enough money in the hopes that eventually they can stop worrying about money.

All they’ve changed is the surface. What they don’t realize is that the problem wasn’t enough money. The problem was always the relationship to money.

But they can’t see it, because it sits in their blindspot.

There’s nothing wrong with any of this. They’re not wrong for having created more money this way (hey, wouldn’t we all like some more money?). They just haven’t truly transformed. They’ve just changed things on the surface level.

People fail to change their lives because they cannot see their own blindspots.