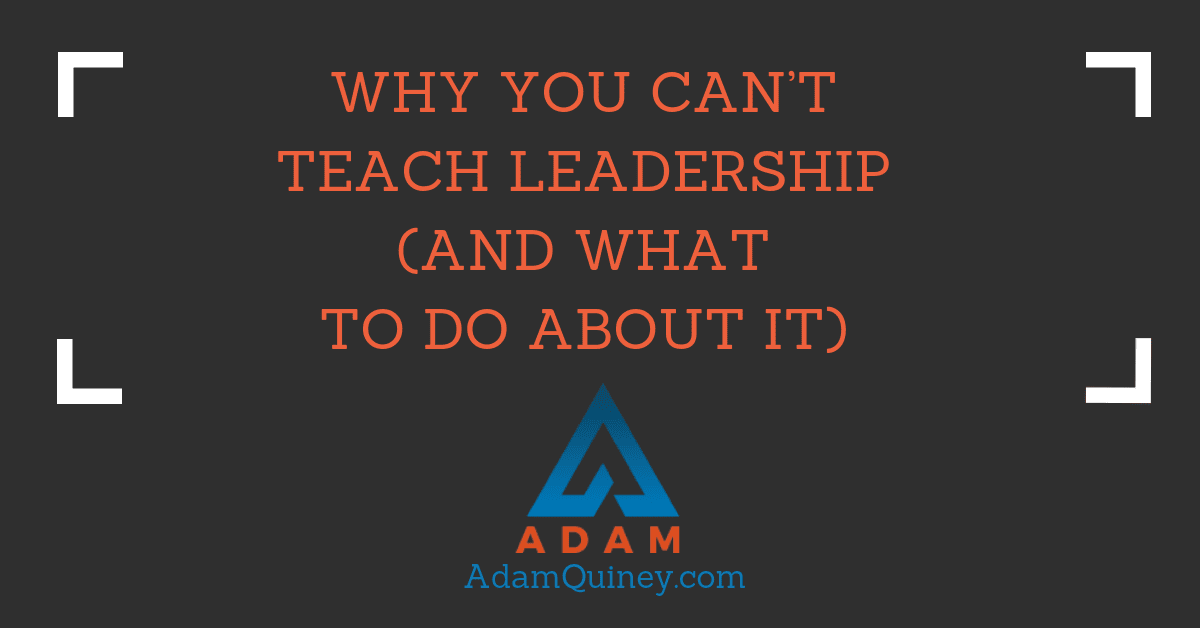 People talk a lot about the fact that you can’t teach things like EQ, soft skills, etc. — ultimately, leadership.

It’s held like a quality you either have or you don’t have, and that’s that. If you aren’t one of the blessed people imbued with leadership essence, then you should make way for the people that are.

I think that people are right. I don’t think you can teach leadership.

Ironically, we continue trying to do so, and the industry is rife with people trying to do exactly that, in spite of all of the wisdom to the contrary.

The real problem is that people see the two choices in front of us as: try to teach leadership, even though we don’t think it’s possible (or insist that you can teach it), or resign ourselves to the fact that some people just can’t be leaders because we can’t teach it, and figure out how to operate around these boulders in our path.

Instead of this being a conversation starter, it tends to be the end of the conversation.

“Well, I don’t think you can teach leadership, so, where should we go for lunch? Arby’s?”

The issue isn’t that you can’t do anything about a lack of leadership, and therefore simply need to resign ourselves to it — it’s that teaching isn’t the modality to deliver leadership. We can’t teach leadership, because our standard approach to teaching is rooted in conveying information.

It’s the way we are raised and taught as we grow up, and then further reinforced as we go through education in our trades, post-secondary, and careers. Most of our attention is geared towards gathering and receiving more information — more knowledge that, hopefully, you’ll be able to put into action and therefore meet the criteria required for getting your job done.

But leadership, at least when we talk about it like a quality, isn’t like any of those things we try to teach with information. It’s a lot less like the process of doing long division, and much more like riding a bike.

There’s no amount of information that will help you develop the experience of being balanced as you ride your bike. That is simply something that must occur through practice and acting.

We have little stakes invested in riding a bike. Failing to do so immediately doesn’t really mean much to us. Granted, it doesn’t make us feel like the superstar we want to be perceived as, but we can handle that humiliation. No one tells us that it’s a virtue to be able to ride a bike, or that we should be able to ride one.

Leadership is the same, but different. It’s the same because, just like riding a bike, no amount of teaching information is going to get you to the experience and quality of being a leader. That is something that can only be developed experientially.

Unlike riding a bike, however, we have a lot of stakes invested in being able to lead. Leadership is held in high regard. We have the belief that it’s virtuous to be able to lead well, and that it’s wrong to fall off the bike of leadership, so to speak. While I can practise riding a bike in my backyard without anyone seeing my humiliating falls, I can’t do so with leadership. Leadership is done in front of people, by definition. You can’t escape the egg-on-your-face feeling that comes with it.

Information is safe. You sit down, take notes, and then practice with it, to whatever extent is safe and allows you to stay away from the possible humiliation of direct action and experience. Having your leadership developed is not. It’s out there, in front of people, actively making mistakes. Not making mistakes on purpose so you can then point to them and feel like you have retained a degree control, but making mistakes in spite of your best efforts to get things right.

Most of the people deciding you can’t teach leadership and then resigning themselves to dealing with the boulders in their way are also stalled in their own leadership. They’ve been taught leadership by others, and have found some approach that works for them, up to a point. That point is sufficient to have them lead in situations until they have to deal with the boulders — the people that cannot be taught leadership — and at that point, they can take things no further. Instead, they try to teach these boulders the same way they have been taught, and when it doesn’t work, they shrug their shoulders and head off to Arby’s.

These days, we have entire schools dedicated to teaching you all of the information you need to ride a bike. And while there are some tidbits that will help you get to the point of riding your bike, most of it is all simply a distraction from doing the scary thing. (Riding a bike has now become a metaphor for leadership — you got that right?)

Humble yourself, get on the bike, and be willing to let us see you fall.

Only on the other side of that will you be able to stand for others to do the same.