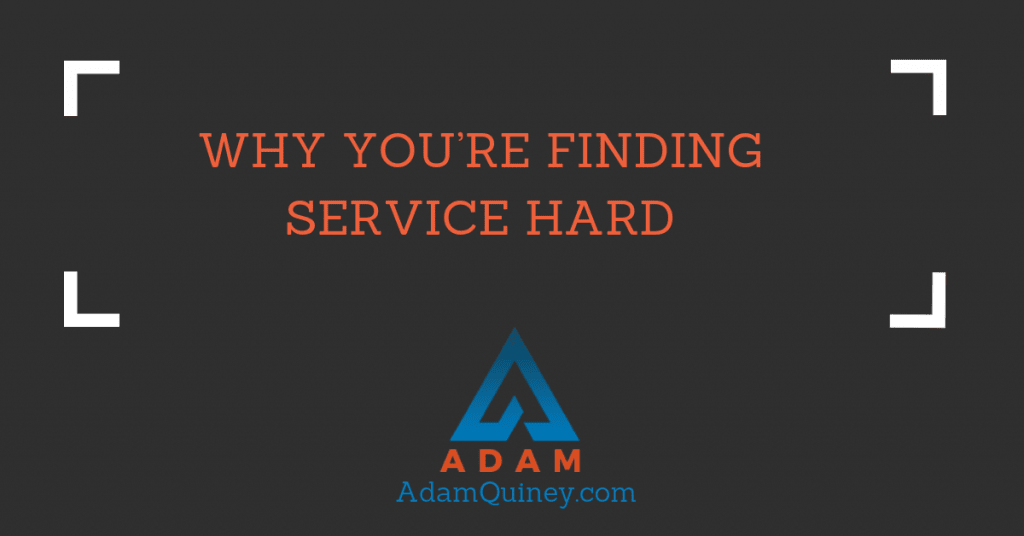 There is no shortage of advice telling you the best ways to hack your way past capitalism while still getting to squeeze out its sweet, sweet nectar.

A lot of those approaches are frustrating. There are a ton of marketers out there, hoping to market you the same approach they’re pushing on you, so that you can then use that same approach to push onto your customers. (Isn’t it funny how crappy an experience it is being marketed to by these people with the “solution”?)

There’s also a lot of wisdom available, and you’ve probably reached the point where you know, on some level, that serving people is the way to go. If you put your attention on serving people, you’re told, and genuinely believe, you will garner results. To Cal Newport’s point: be so good that they can’t ignore you.

What no one tells you is that serving people, in the face of the world telling you otherwise, is damn challenging.

Early on, you’ll be in an absurd amount of work, and likely seeing very little return. You’ll see little return because your skills aren’t that sharp yet, because people don’t know who you are, and because you won’t have built up the kind social capital that pays dividends over time. And since that capital pays dividends over time, you will inevitably have some time pass before things come back to you.

These aren’t really bad things (you get to choose how you relate to them, and something being “bad” is just one of many relationships you can have with something) — but they are things. What I mean is that whether you relate to them as bad or good is your choice, but the fact remains that an approach to growing your business via service brings along its own peculiarities.

When you are paid in a transactional approach, the work you are doing is usually work you’ve already been paid for. Money comes in, work goes out. There’s a comfort to that approach. The payoff is immediate and in front of you. You don’t have to trust whether or not you’re doing the right thing — your bank account is telling you so.

A service-based approach is slower and based on building momentum. Growing a business this way can be frustrating, because it means that putting your sights on growing a business to six-figures of profit in six months tends to have you step over what’s important. It might mean you have to stick with the job you don’t love a little longer, even and especially when it would feel so good to dramatically quit and walk out.

I’ve been building my business based on service for around nine years now, and I notice that the same fears play out. These days our bank accounts are pretty healthy, and money is fairly abundant. And yet, my fear is every bit as plentiful.

I come home from events that I go to, and my calendar is filled with appointments. People I’ve met that are interesting to me, people I met that found me interesting and would like to talk. People that I don’t really think are my people, but touched my heart in some way and I want to gift them some of my time. People that are courageous enough to reach out to me, very likely cannot afford my rates, and yet, that I want to serve all the same.

And every time one of those appointments goes on my calendar, my fear looks at it with me and says “Come on now. That’s not going to convert into revenue. You’re wasting your time. You need to be grinding man!” (Worse, my fear makes an obscene grinding gesture while it’s saying that.)

My fear tells me that when I’m sitting at events having a good time, I should knock that off and go and find the whale at this event.

And the net result of following that fear is that I look past the human in front of me, and forget about their possibility. I lose sight of my humility — my ability to be humbled by how beautiful and capable the person right in front of me is.

Life stops being joyful and present and easy, and it becomes hard and difficult and frustrating (“WHY AREN’T THE WEALTHY PEOPLE HERE IN FRONT OF ME TALKING TO ME?!”)

The current around you is one of capitalism. It is a current that pulls you towards money first, people second. It’s a current that steers you towards chasing immediate results (and even then that isn’t fast enough), making profit, and selling an image that you’ve got it sorted out.

And swimming against it demands something of you.