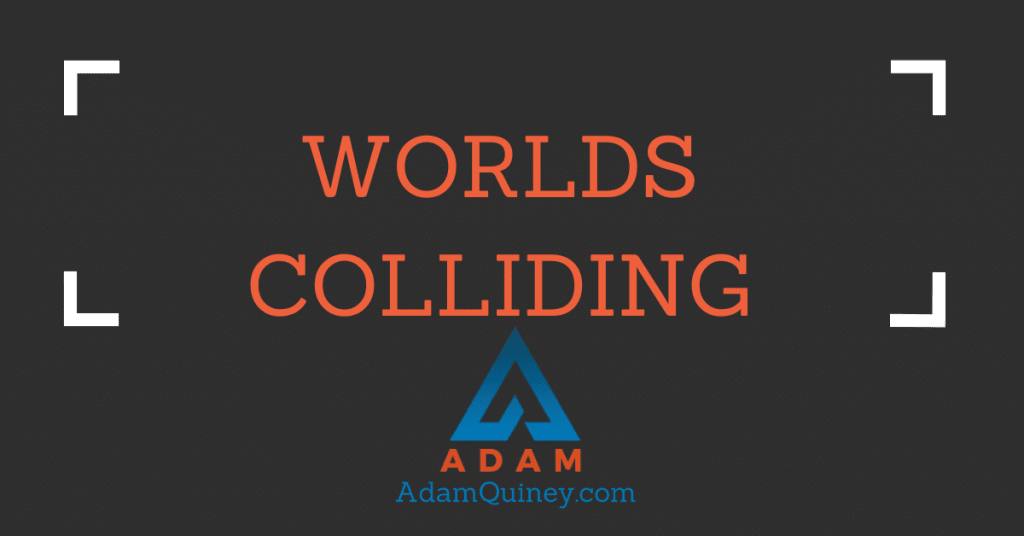 “If Relationship George walks through this door, he will kill Independent George! A George, divided against itself, *cannot* stand!”
— George Costanza, Seinfeld

George Costanza is a bit of a goober, but in this sentence, he really got to the heart of the human condition.

George thinks the solution to his problem is to avoid having the two parts of himself come into contact with each other. Keep the carefully crafted silos of his personality away from each other. That way, the two shall never meet, and he can go on showing up one way in his life over here, and the other way of showing up in his life over there.

Have you noticed where you do this?

Maybe you have the intensity and commitment and drive that is part of who you are, expressed over here in your entrepreneurial endeavours, but over here with your kids, you bring peace, and calm and safety.

At the time, I would rather have avoided people from work altogether than to have the two worlds collide. I couldn’t let them see me like that.

I’m not advocating that the solution would have been for me to start wearing baggy clothes at work and showing up stoned and seeing how that goes.

The actions I took aren’t really what this is about. It’s the fact that I couldn’t even let people /know/ that there was this other version of me that existed. The fact that, at the time, I loved a good joint, had to remain hidden. I wouldn’t even bring it up.

You can listen to my story, and think “Ahh, well, I’m comfortable with that part of myself”, which is great, but that’s kind of missing the opportunity. Rather than look at how you don’t have the same dis-integration that I did, the gold lies in taking a look and seeing your own version of how this shows up.

There’s a few ways this shows up in the arc of our lives. The most common is like I just described above — show up expressed differently based on the people we’re with.

The second most common is to hustle, grind and work your ass off for fifty years. Then, retire, and live the life of freedom, bliss and peace.

This is basically playing out the “Two George’s” approach to your life, but separating them by time, rather than physical proximity. “Work George” shows up and is expressed for the first fifty years of your life. Then, “Retirement George” shows up.

And when you’re in the game of shutting down one part of yourself (whether it’s through time, or location, or relationships, or geographic boundaries, or something else), you get the experience of only being partially expressed.

And this is what makes retirement so dangerous.

If you’ve been expressing the driven, determined part of yourself for the first fifty years. It’s going to feel great when you finally give yourself a break. But then, after a while, this part of yourself is left with nowhere to go. Nothing to do. And when the practice of retirement doesn’t fully live up to the promise it held, we go looking for something else to resolve the feeling we’re left in the wake of.

It’s not the retirement itself that is dangerous. It’s that it forces you to confront the thing you’ve been avoiding for the last fifty years: that a George divided against itself, cannot stand.

You don’t have to wait fifty years to confront that thing.