YOU ARE YOUR JUDGMENTS 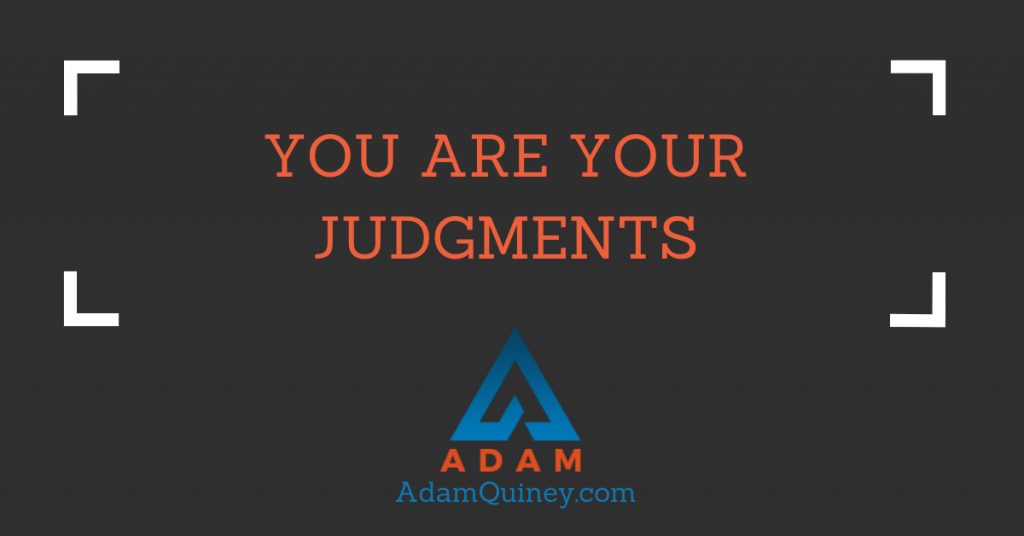 Let’s imagine you have a belief that people with more money than you relate to you as lesser than them, think you’re not worth their time, and that any attempt on your part to have a conversation with them is ultimately in order for you to get money from them.

We could draw this out on a spectrum this way:

People with more money –> Beliefs You Have About Them –> You

You may intellectually understand this is “just a story” or “just a judgment”, but trying to intellectually attack our beliefs and fears doesn’t work. (You’ve noticed that right?)

You might also say to yourself “I don’t actually believe that’s true, but I’m pretty sure THEY feel this way.” And it’s all fine to try and convince yourself of that fact, but it’s still ultimately your belief — your fear.

So, these beliefs tend to take up space in your life, and dictate your actions. When you approach someone with more money than you, you may go out of your way to ensure that they understand you aren’t trying to get their money, or that you really appreciate them taking the time for you, or whatever.

The irony of these actions designed to “fix” your fears, is that they end up reinforcing them. Kind of like if someone starts talking to you on the bus and says “By the way, don’t worry, I’m not being nice to you just so that I can steal your wallet.”

Here’s the part that’s fascinating — those beliefs you have, projected onto people with more money than you, you also act out from the other end of the spectrum, toward people that have less money than you.

If this is our previous equation (I’ve abbreviated people with more money than you to $$+):

Then the other side of this equation also holds true:

Those ways you judge people with more money for acting, being, thinking, and so on — you show up the exact same way with people that have less money than you. This second side of the equation is often a lot harder to see, in particular because we have judgments about the beliefs that we’ve projected onto people.

You hold judgments about people you perceive to have more money, and from that judgment, you hold that they’re wrong. Because you make them, and your judgments, wrong, it becomes really challenging to even consider the possibility that you act out the same way.

After all, you’re so dead set against this kind of attitude and approach, why would you ever do it? It’s the last thing you’d do — you’re so committed to not being this way, there’s no way you would show up the same way in your own life.

And therein lies the blind spot.

Because of your complete inability to consider the possibility that you could be the exact same way as those you would judge, you have no capacity to see the places where it’s true. It is, quite simply, invisible to you.

Your mind (and resistance) will create all kinds of excuses, exceptions and justifications for why the way you show up is different than those people you’re judging. But the equation holds true, and those exceptions are simply the way your cognitive blind spots remain outside of your awareness.

Here’s what you can do about it:

Get clear on a judgment you have. Then, rather than ask yourself the question “Do I do this?”, get curious about where, and how, you show up the exact same way.

If you really want this to make a difference for you, you need to get beyond the intellectual seeing of this. Like “Oh yah, I totally know I do that, here are three places I can list right now.”

There’s nothing available for you in the places where you already know something.

Go and discover where you are showing up exactly the same way you judge others. Catch yourself off-guard. Notice this kind of thing, in the moment.

The juice lies in the discovery.