Your Impact, as Leader 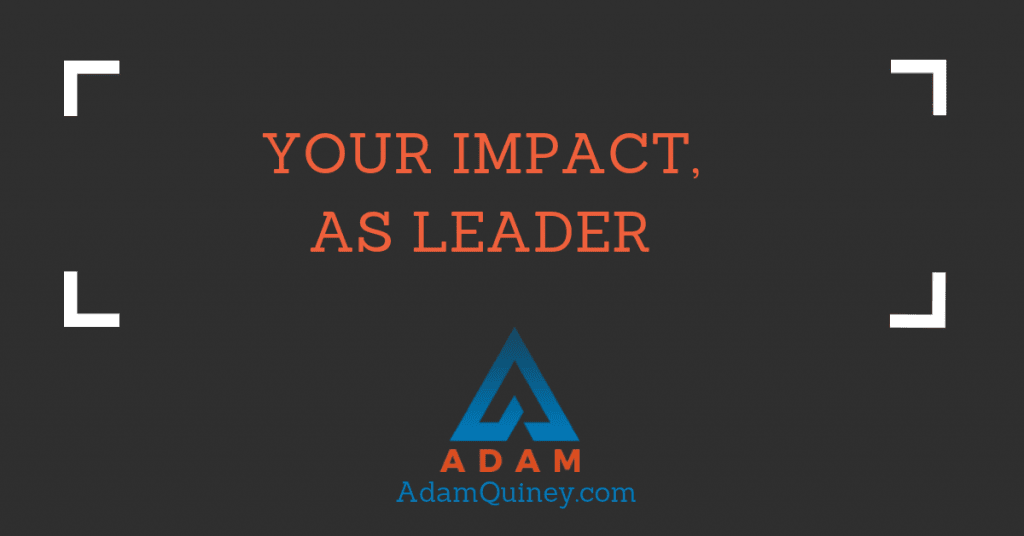 Eldin was going over the latest monthly figures and, as had become a bit of a pattern, they were dismally low. Betty, Colin and Denise were sitting and listening to the bad news, and Mario was nowhere to be found, in spite of the fact that numerous reminders of this meeting had been sent out.

Denise was sitting with her arms crossed and a giant scowl on her face, and Eldin was sweating, trying his best to deliver news that didn’t feel good for anyone, and hoping that the messenger wouldn’t be killed in the process.

Fifteen minutes into the meeting, Mario breezed in holding a Starbucks cup, and apologizing briefly. “Sorry everyone, got held up.” He took his seat and Eldin breathed a sigh of relief, grateful to have the attention taken off of him momentarily.

It was at this point that a new voice in the room spoke up.

“Okay, we’re going to stop there for a moment. Let’s talk about what’s happening here.”

Jonathan was an executive coach that the team had brought in to support developing their leadership and turning the company around.

While Dropkick Technologies Inc. had started out promising and seen profits rising quarter over quarter for the first five years, it had started to level off and gotten stuck as of late. The team knew that they needed something beyond what they could figure out on their own, and the various approaches they’d taken up to this point — round table meetings, CEO peer-to-peer mentoring, management consulting, etc. — had all fallen short.

With profits continuing to narrow and the leadership team at each other’s throats, things were dire. There had been a trend of employees starting to leave for other jobs, and while Betty was irritated by this lack of loyalty, she had to admit to herself that she was somewhat envious of their ability to move on and start fresh.

At their wit’s end, the team had decided to take one last swing and bring in someone Betty had met at a recent conference on leadership.

Jonathan turned to Eldin and smiled, “Thanks for sharing some difficult news Eldin. Will you do me a favour and grab a seat for a little bit and take a few deep breaths? You’re doing great.” Eldin, sat down and relaxed in his seat, visibly relieved.

Mario, charming as ever, smiled back, “Good morning.”

Mario was known for being chronically late. While he was brilliant and provided a tremendous amount of value at Dropkick, he was also a continual distraction, showing up late, interrupting processes once they’d been started, and being unwilling to do anything about his punctuality. Betty and Colin had both taken swings with Mario, multiple times, even going as far as texting him before every meeting and setting up accountability check-ins. Nothing had worked.

Jonathan continued, “Mario, I noticed you showed up 15 minutes late to the meeting. Tell me about that.”

Mario maintained his relaxed pose, “There’s not much to tell, I just got caught up. I had a client meeting that went over, and then needed to take care of a few e-mails before I could close everything down.”

Denise’s scowl deepened, and Betty could feel her frustration with Mario mounting. He was just so glib about everything.

Jonathan was unfazed, “Got it, thanks for sharing that. Were you unaware that this meeting was scheduled?”

Mario responded, “Nope, it wasn’t that, it was just that the client meeting kept going longer than I thought it would.”

Jonathan continued, “Great. So there are a couple of things I notice here. The first is that you came into this meeting, late, holding a Starbucks cup. I don’t know the story behind that yet, but that certainly sends a signal that you had time to stop for coffee before you came here. We’re going to get into your impact in a second, but before we do, I’m going to invite you to notice the absence of your leadership in this conversation, and in your punctuality.”

Mario’s body-posture was no longer relaxed.

“Mario, you’re speaking as if you had no control over the client meeting. That stops today. If you are committed to being a leader on this team of leaders, it’s time for you to own that, and show up like one. A leader isn’t at the effect of their clients. They manage their time. If you had a plane to catch, and your client meeting was going to go longer, what would you have done?”

Mario relaxed a bit and laughed, seeing a way out, “Well, sure, but I didn’t have a plane to catch, so that doesn’t really matter.”

Jonathan took it in stride, “Got it, let me ask you a new question: are you familiar with the concept of a hypothetical?” The rest of the boardroom laughed while Mario frowned.

Jonathan’s face broke into a broad smile, “Look Mario, you’re doing fine. This is uncomfortable, and I get that you want to joke about it. I do too — that would be more comfortable for both of us. But you aren’t currently present to the impact you’re having. I’m not here to make you feel bad — I’m here to support you developing as a leader, and that means starting by looking at the places where you aren’t.”

Mario, straightened. “Okay, well, if I had a plane to catch, I’d end the meeting.”

“Great, and if there was more to talk about with the client?”

Jonathan was relentless. Betty and Colin made eye-contact across the boardroom. This is the conversation they’d been trying to have with Mario forever.

“Okay, great. So you would find a way to make your plane, no matter the conversation you were having with your client?” Mario responded quickly, “Yah, sure.”

“Great. So we’ve established that you don’t have to be at the effect of meetings with your clients going over. And look, it’s clear that everyone here appreciates the work you’re doing with your clients — we’re not talking about removing that from your tool set. We’re here to help you broaden your range. To expand what you’re capable of, rather than to change what you’re capable of.”

Jonathan paused and noted nods from around the room. “Now, we’re going to get you present to the impact you’re having when you show up the way you do.”

Jonathan turned to Betty, “Betty, we’ll start with you and then go around the room to the right. When Mario shows up late, what’s the impact on you?”

Betty began, “Well, I think he should manage his time better, and if he just started using a calendar and an appointment keeper like I do…”

Jonathan interrupted, “Thanks Betty. I’m going to stop you there. I’m not asking you to fix this for Mario. That’s his job, and he’s more than capable of it. I’m asking you to share the impact of his tardiness on you.”

Betty was frustrated. She really wanted to fix Mario, and was worried that this was going to go the way it always did.

Jonathan saw the frustration and spoke again, “Betty, I can see you’re frustrated, and I get it. When people don’t show up the way we do, it triggers our humanity. It’s annoying and we get attached to them changing. But that’s not your job here. You chose to have Mario on this leadership team, and so did he. Your job is to relate to him as a leader, trust that he’s up for the task, and then help him be fully present to his impact. From there, he gets to choose how he shows up. If he’s unwilling to address his impact, your team gets to choose if it’s willing to keep being in that impact.”

Betty took a breath, and tried again, “Okay, when Mario shows up late, holding a Starbucks cup, I feel like he thinks he deserves to be an exception to the rest of us. I feel like he’s entitled and doesn’t care about the commitment the rest of us are making. I get angry and resentful of him, and it makes it hard to see the good work he’s doing. And I feel like I can’t trust him.”

Mario jumped in, “Well, hold on a second, you don’t see everything I’m doing behind the scenes, I’m…”

Mario was clearly frustrated, but the way Jonathan had put it was so simple, he couldn’t really argue with it. He tried all the same, “Well, maybe not always, but sometimes that’s just the way it is…”

Jonathan laughed warmly, “I really get it! It’s hard to let go of your circumstances, but that’s not what leadership is about. I’m here to stand for all of you, and that means trusting that each of you has the capacity to create and show up as a leader regardless of your circumstances. Mario, you’ve already made it clear that it’s possible for you to show up on time, at least in the examples we’ve looked at, and I’m going to assert that, even when you can’t address your circumstances that way, you could manage for this impact. So, see if you can set aside your circumstances for right now, and just consider the question on the table.”

Jonathan re-iterated the impact Betty had shared, and then checked back in with Mario, “Mario, is that the impact you’re committed to having here as a leader?”

To Mario’s credit, he shifted himself in his seat and seemed to set aside his resistance as best he could. “No. Not at all. I don’t like that that’s how I’m perceived, and that is definitely not how I want to be seen.”

Jonathan was effusive in his praise, “Awesome! I didn’t think so either! Okay, so, in a bit, we’ll look at what you might need to put into place to overcome the habits you’ve learned to adopt, so you can have the impact you’re really here to have as a leader. For now, let’s continue with the feedback.”

Betty was floored. Jonathan’s approach seemed so simple, and yet he was providing so much space for everyone. He didn’t get drawn into the argument, he was simply forcing everyone to take an honest look at what was showing up. She was excited to see things continue to unfold, and mildly nervous about when it was her turn.

Jonathan turned to Denise, who was still scowling, and asked her, “Denise, what’s the impact Mario’s tardiness has on you?”

Denise, continuing to scowl, answered flatly, “It’s fine, I just deal with it.”

Jonathan laughed heartily — a response no one in the boardroom was expecting.

“Well, I hear the words you’re saying, but your face is telling me a different story! Are you aware of how loud it is?”

Denise’s face did a circus-trick of trying to scowl further, then unscowling and showing no emotion, and then scrunching back up into a scowl.